„‘The Planet We Think We’re Living on No Longer Exists’: 3 Profound Ways the Art World Can Address the Climate Crisis“ with Joan Jonas

At the Verbier Art Summit, artists like Joan Jonas and Andrea Bowers offered solutions for the future 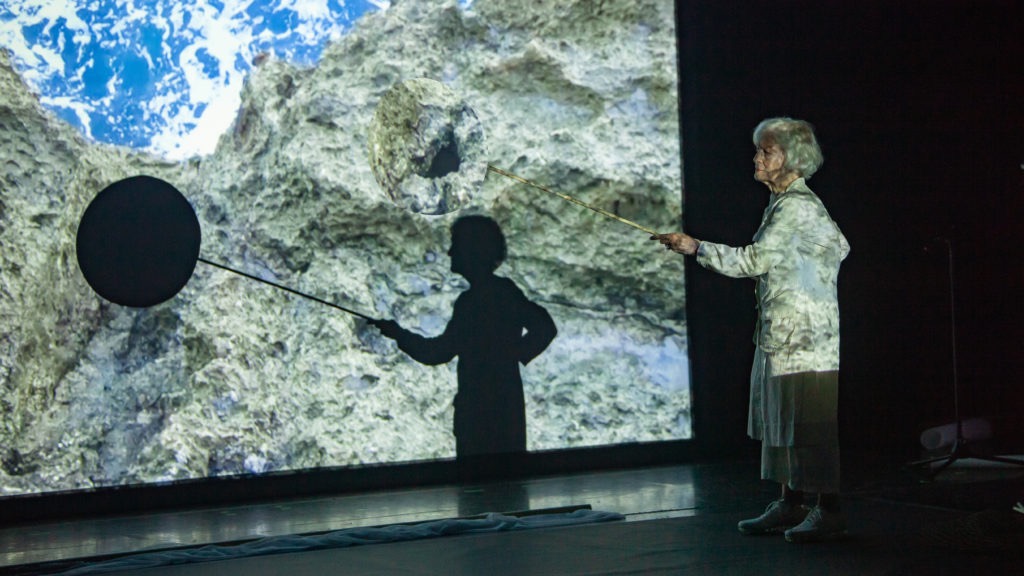 While the art world’s habit of jetting from one art fair or biennial to the next becomes increasingly untenable as the climate crisis looms, a group of art industry leaders headed to the Swiss mountaintops last weekend to discuss how the field can reduce its complicity in environmental collapse.
The irony of traveling to a remote alpine village to discuss the climate at the fourth annual Verbier Art Summit was not lost on some of its speakers. Across two days of programming, “Resource Hungry: Our Cultured Landscape” showcased presentations by artists including Joan Jonas as well as organizations like Julie’s Bicycle, but it was finally on the last afternoon that Stefan Kaeg of art group Rimini Protokoll voiced what everyone had been thinking the whole time: Could the knowledge shared in Verbier have happened in a different form, without any of us being there? However noble the cause, one wonders if luxurious symposia like Verbier are even close to sustainable.

While the art world drags its heels on structural overhauls, this year’s organizer Jessica Morgan, director of Dia Art Foundation nevertheless pulled together a fascinating crop of creatives to tackle formidable questions around the industry’s ecological impact.
Here are three of the weekend’s biggest takeaways.

1. Form Can No Longer Follow Function:
Artist Andrea Bowers said it plainly on Saturday afternoon: “The earth is not ‘out there,’ we are part of it.”
Indeed, as we sat glassed-in on the third floor of the resplendent W Hotel, with the occasional paraglider-on-skis floating by, this could be easy to forget. Many speakers referenced the need to break down the divide between the museums, galleries, art fair halls, and the real, exterior world. Offering a Global Warming 101 reminder, French architect Philippe Rahm, who works in the fields of physiology and meteorology, stressed that 42 percent of CO2 emitted today is from the cooling, heating, and general operation of buildings.
So, how can a climate-controlled storage space, gallery, or museum reduce its energy consumption, or is that besides the point? Rahm said we need to look beyond updates to wall insulation and instead completely redesign space in line with what he calls “climactic architecture”—a method that utilizes a building’s own convection, radiation, and conduction capabilities to optimize renewable resources. Architecture, said Rahm, “is no longer [based on the idea of] form following function or function following form. It’s function for the form that follows climate.”

Renowned professors of design practice Rosario Hurtado and Roberto Feo—collectively known as El Último Grito—took the question raised by Rahm to a more speculative level: What would it mean if museums were free from fixed spaces altogether? While humans continuously create permanent structures, many of these places deteriorate or get demolished relatively soon after. Meanwhile, structures initially built with ephemeral intentions (take the Eiffel Tower, for example, which was supposed to be a temporary installation for the World’s Fair) survive for centuries.

With this, Hurtado and Feo’s question seemed to push back against the status quo of the art world’s usual haunts, underscoring that the museums and galleries that we have become so familiar with need to be fundamentally reconsidered. While spacious, pristinely white, and climate-controlled venues may feel like they’re here to stay, art historian Dorothea von Hantelmann pointed to exhibition spaces of the 18th-century which were extremely crowded, with walls crammed with art from the floor to the ceiling. “We need to strive against the white cube,” said von Hantelmann. “We need to bring things that we’ve been separating back together.”

2. Older Doesn’t Always Mean Wiser:
One of the most significant changes professors Hurtado and Feo said they witnessed in their students over the past decade was the shift away from individualistic thinking towards collaboration. It’s a shift seen beyond the confines of art and architecture schools, of course, as today’s youth bring forth new ideas and fight collectively for their future, most notably through the Fridays for Future movement.
Artists Joan Jonas and Andrea Bowers echoed this hope in young activists. Jonas explained that children have become subjects in her work about the future and the environment (“they’re the ones who are going to inherit it,” she added, simply). With similar motivations, Bowers’s new video „My Name Means Future“, which is currently on view at New York’s Andrew Kreps Gallery, spotlights Tokata Iron Eyes, a 16-year-old member of the Standing Rock Sioux tribe, and her involvement with the movement to stop the Dakota Access Pipeline. But what was missing in both presentations was a consideration of the changing role youth plays in viewership; both artists were mute on whether they even considered the importance of young people seeing their work.

To place the crisis of climate change on the shoulders of one generation and await a solution is clearly not the answer; Catherine Bottrill from Julie’s Bicycle, a London-based charity that supports creative industries’ transformations towards sustainability, stressed the need to “support young people who are going to bring about solutions,” while operating at all ages and levels laterally, collaborating across organizational boundaries and typical hierarchies.


3. Decolonizing Narratives Are Ecological Narratives:
The calls to decolonize the art world might not immediately conjure a connection to climate change. However, Brazilian philosopher Djamila Ribeiro emphasized that, more than listening to the voices of indigenous cultures, we need to begin to act upon their novel ways of thinking and apply them to the ways we treat the natural world. In order to hear those voices that are so often drowned out, current power structures need to be dismantled, he argued. Other speakers, including Bottrill of Julie’s Bicycle, concurred: Hierarchies have to be disrupted. This was a major talking point, as architect and urban designer Adrian Lahoud pushed for a similar upheaval, adding that “the planet we think we’re living on no longer exists.”

One of the most effective ways to fight climate change will be to redefine our values. Lahoud shared a moving story behind a painting on view in the current edition of the Sharjah Architecture Triennial, which he curated. A group of 40 Aboriginal artists painted an 8-by-10-meter canvas, collectively depicting the story of their cultural history; they then submitted the piece to the Australian government as “proof” of their rights over nearly 30,000 square miles of land. Amazingly, the Australian government accepted this painting as evidence of ownership and, in 2007, granted them the rights over the disputed territory.

Alternative modes of existence “embody different ways of being in the world, outside of the xenophobic, extractive, capitalist modes of relating that currently dominate the world, that lead us to exhaustion, and soon to extinction,” according to Lahoud. And, at least in some cases, art can be a welcome bridge to these new ways of thinking (image: Joan Jonas: „Moving Off the Land“, 2016/2018 at the Fort Mason Center for Arts & Culture, San Francisco, 2019. Photo: FMCAC/Justin Oliphant. Courtesy of the Verbier Art Summit.)