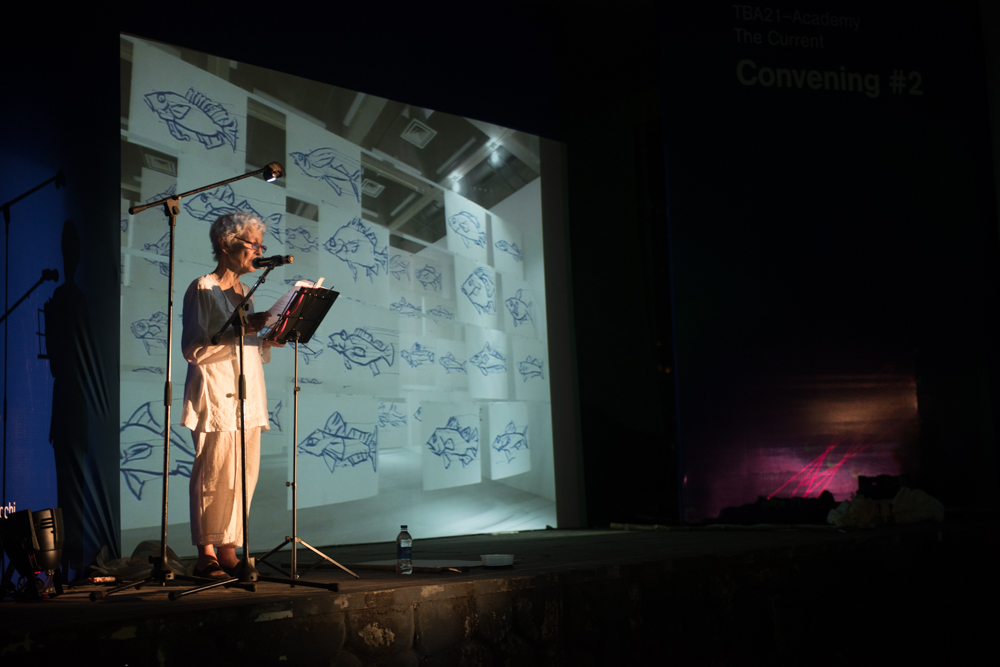 In “drØwn yØurself in this Øcean of lØve,” American author and philosopher Nicola Masciandaro quotes the 13th century poet and female mystic Hadewijch: “The abyss into which she hurls me / Is deeper than the sea” as he poetically and speculatively traces a bottomless commentary on the mystical oceanic abyss, a submarine prosimetrum about being swallowed by something closer than your own breath, a sinking exploration of the deepest whirlpool of bewilderment.

Joan Jonas’s immersive lecture-performance draws from a wellspring of materials, literature, mythology, and the artist’s collections of sketches and notes on the sea, exploring “the ocean as a poetic, totemic, and natural entity, as a life source and home to a universe of beings.” Clothed all in white, the artist uses herself as a screen and as a surface, moving along the projections, or holding a long sheet of white paper against her body. Jonas’s individual works, whether originally created in video, performance, or installation, often exist in transit, translated and restaged into other mediums. As such, her practice produces a uniquely circular trajectory, acquiring a dreamlike quality by simultaneously expanding and folding back on itself over time. Video footage of underwater scenes from Jean Painlevé’s black-and-white reels of sea creatures to shots of aquariums is poetically and associatively intersected with excerpts from Herman Melville’s Moby Dick, Sy Montgomery’s Soul of an Octopus, and Italo Calvino’s The Aquatic Uncle.

Biographies: Nicola Masciandaro is a philosopher at CUNY Brooklyn College, New York, writer, and passionate alpinist. His works originate from the core of speculative medievalism (mainly medieval literature), focusing on the rise of the individual, mysticism, iconology, demonology, grief, penitence, “black ecology,” and Black Metal Theory. Hyper-productive Masciandaro has published and contributed to more than 20 publications (many of them accessible online for free, e.g. “Decapitating Cinema,” “Metal Studies and the Scission of the Word,” “Unknowing Animals,” “Non potest hoc corpus decollari: Beheading and the Impossible,” “Exploding Plasticity,” “Getting Anagogic,” and his latest work ,“Sacer”), as well as dozens of essays. He publishes his own website Glossator and the blogs The Whim, Bergmetal, and T.A.C.T. He is also the co-director of Punctum Book. His is permanently active on Twitter and often on YouTube.
http://thewhim.blogspot.co.at

Joan Jonas’s individual works—whether originally created in video, performance, or installation—often exist in transit, translated and restaged into other mediums. As such, her practice produces a uniquely circular trajectory, acquiring a dreamlike quality by simultaneously expanding and folding back on itself over time. The oceans are an ongoing thematic touchstone in Jonas’s recent works, such as her project for the United States Pavilion at the 56th Venice Biennale, “They Come to Us without a Word” (2015), a multilayered ambient work addressing the spiritual aspects of nature through video, drawings, objects, and sound as well as her performance held in Kochi on the occasion of TBA21–Academy’s second Convening. https://www.tba21.org/#item--ephemeropterae-2017-4--1660