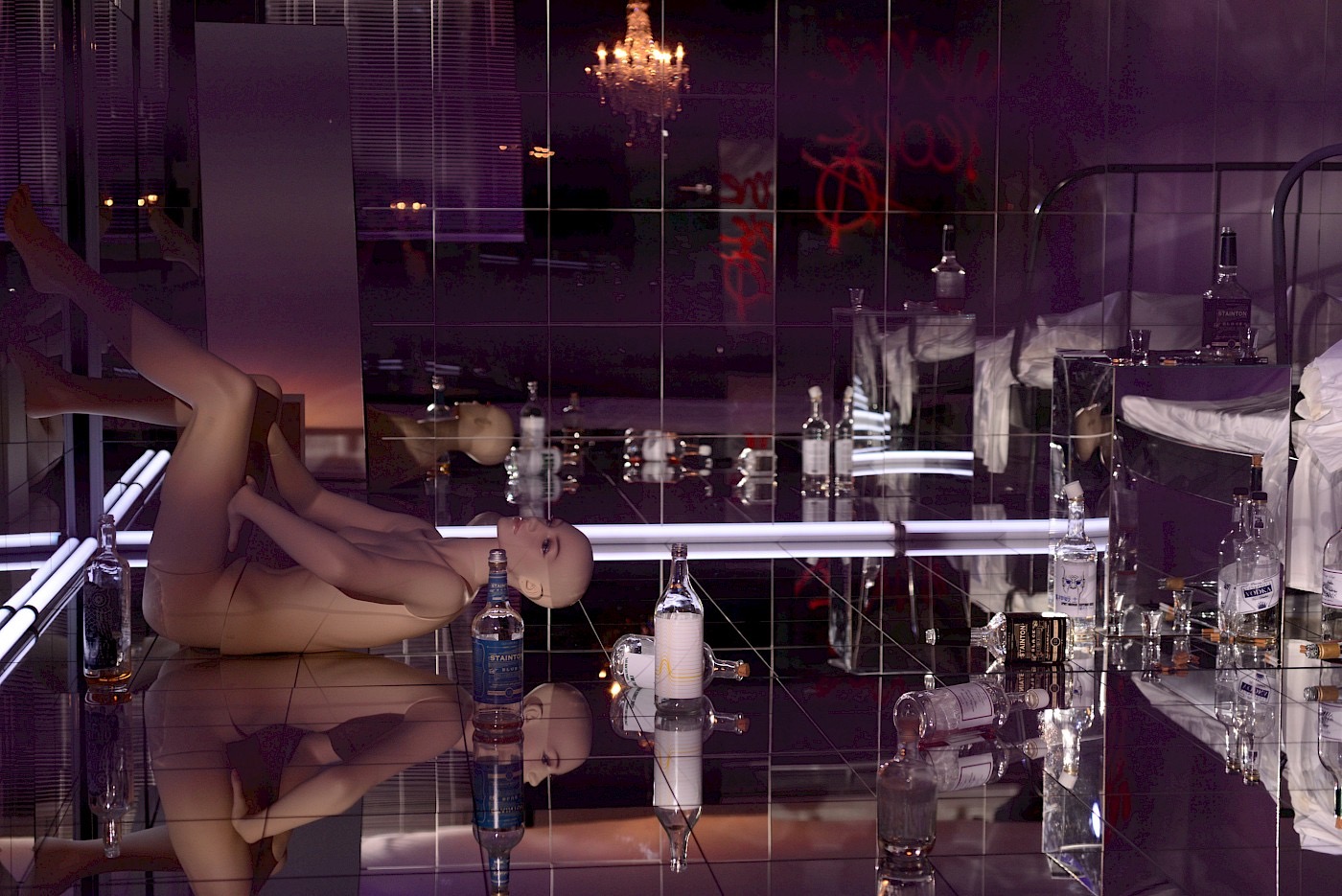 Timothy Taylor, New York is pleased to present an installation of a set from Josephine Meckseper’s film
PELLEA[S], on view from January 24 to February 23 at 515 West 19th Street. The Kitchen will present a
screening of PELLEA[S] on January 29.
PELLEA[S] adapts Maurice Maeterlinck’s otherworldly play ″Pelléas et Mélisande″ (1892) for today’s
sociopolitical landscape, weaving together fictional scenarios and dramatic footage captured by the artist at
the 2017 presidential inauguration and the landmark women’s march that followed. Conflating
contemporary political realities with a doomed love triangle, the city of Washington, D.C. and its
architecture become a context and site of departure, giving voice to debates around notions of gender found
in the original play. Meckseper expresses through cinema the dramatic narratives and relationships
contained within the universe of her signature glass and mirror vitrines, with parts of the film set in D.C.
and others in interiors designed by the artist. PELLEA[S] was screened at the Whitney Museum of American
Art in 2018.
The gallery will exhibit one of the mirrored film sets from PELLEA[S], representing one of the pivotal
scenes of the movie. With its timeless, illusory, and refractory aspects, the mirrored set defines the mythic space for the love story that unfolds. The set is a complete installation that features elements and props
from the movie. Much as in Dadaist and Surrealist cinema, the interaction of objects, mannequins and
symbolic architecture in Meckseper’s film set occur through juxtaposition to saturate the relationship
between the object and a perceived subject in control.
Meckseper’s practice is often informed by the language of film and advertising. Here, Meckseper found
precedent in Rainer Werner Fassbinder’s film set for ″The Bitter Tears of Petra von Kant″, which was filmed
next door to the artist’s childhood home in Germany in the 1970s. She was also inspired by the set designs
and spatial dimensions in Alain Resnais’, ″Last Year at Marienbad″, 1961. A time period in which artists like
Claes Oldenburg created his ″Bedroom Ensemble″, a sculptural installation from 1963, based on a magazine
advertisement. As a performative and psychological realm, the film and its sets unravel an expressive field
that allows Meckseper to subvert the notion of the male gaze and examine the performance of gender
both in cultural production.
The screening of PELLEA[S] at The Kitchen on January 29 at 6:30 pm is free and open to the public. The
Kitchen is located at 512 West 19th Street. The exhibition and screening of PELLEA[S] coincide with the
Metropolitan Opera’s production of Claude Debussy’s ″Pelléas et Mélisande″ from January 15 to 31.
Josephine Meckseper’s work has been exhibited at institutions worldwide, including solo-exhibitions at: MOSTYN,
Wales, UK (2018-19), Neuer Aachener Kunstverein, Aachen, Germany (2014); The Parrish Art Museum, Water Mill,
NY (2013); Migros Museum für Gegenwartskunst, Zurich (2009); and Museum of Modern Art, New York (2008) and
numerous international biennials. Her works are in the permanent collections of institutions such as the Whitney
Museum of American Art, the Solomon R. Guggenheim Museum, New York, The Museum of Modern Art, New York,
and the Metropolitan Museum, New York. Her upcoming museum solo exhibitions include: Frac des Pays de la Loire
and Hab Galerie, Nantes. The artist lives and works in New York City (photo: Josephine Meckseper.)