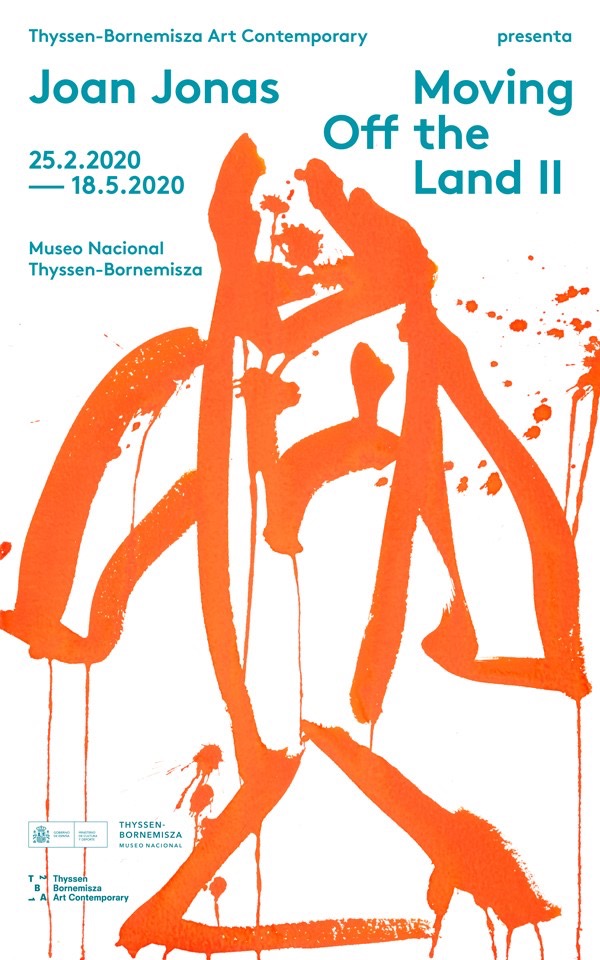 Joan Jonas’s exhibition „Moving Off the Land II“ centers on the role the oceans have played for cultures throughout history as a totemic, spiritual, and ecological touchstone. This project is the culmination of three years of intensive research in aquariums around the world as well as in the waters off the coast of Jamaica, commissioned by TBA21–Academy, an itinerant platform that forms part of Thyssen-Bornemisza Art Contemporary (TBA21). The exhibition was first inaugurated at Ocean Space, Venice, in 2019 and comprises new video, sculpture, drawing, and sound works, as well as a performance to be presented in Madrid on February 26, 2020.

In „Moving Off the Land II“, Jonas pays tribute to the oceans and their creatures, biodiversity, and delicate ecology. Her new works dive deep into the ocean water, swim with the fish inhabiting it, and weave in literature and poetry by writers who have homed in on the liquid masses that cover two-thirds of the planet. Following the methodology that has earned her her lauded reputation, Jonas combines poetry and prose by writers such as Emily Dickinson and Herman Melville with texts by Rachel Carson and Sy Montgomery, and with moving images filmed in aquariums and in Jamaica, where algae bloom and overfishing pose urgent threats to the environment.

As part of a sustained dialogue about their respective work, the marine biologist and coral reef and photosynthesis expert David Gruber has shared with Jonas his captivating underwater recordings that focus on biofluorescence. In 2018, Gruber visited Jonas at her summer home in Cape Breton, Canada, where he shot footage of her dog, Ozu, playing with the surf on the shoreline. The rich imagery by Gruber and other collaborators is juxtaposed with Jonas’s own voice and that of young people she frequently collaborates with, as well as music by the celebrated composer and drummer Ikue Mori and by the acclaimed musicians María Huld Markan Sigfusdottir and Ánde Somby. In her unique visual language, Jonas has created a confluence of the poetic and the observational, of mythological folklore, contemporary narratives, and scientific studies, inviting viewers to plunge into a spellbinding experience.

Joan Jonas is one of the most renowned artists of her generation. She is celebrated for her groundbreaking work in performance, installation, and video since the 1960s. At a time when art started leaving the confines of the gallery space, Jonas created work that converged with dance, music, and theater. Ever since, her work has tackled complex questions regarding humans’ relationship with the environment. With this new work she revisits some of the themes touched upon in her US Pavilion exhibition (Jonas represented the United States at the 56th Venice Biennale in 2015), „They Come to Us Without a Word“: the natural world and the animals inhabiting it—from bees to fish—as well as the present danger of climate change and extinction.

The oceans are a recurring motif in Jonas’s work. For the video Waltz (2003), she visited a beach near the woods in Nova Scotia, where she spent most of her summers since the early 1970s. With a group of friends and accompanied by her dog, Jonas performed a series of imagined, abstract rituals involving objects such as masks, a staff, and mirrors. The work calls to mind ancient fairy tales and myths surrounding the oceans, as well as their raw and fragile beauty. Beach Piece (1970) was performed at Jones Beach in Long Island, New York, where the audience was invited to stand on the muddy ground as performers appeared from and disappeared into sand dunes. Jonas, wearing a white sports mask, stood on a ladder with a mirror and reflected the sun back at the audience. In the installation „Reanimation“ (2012), Jonas focused on Icelandic and Norwegian landscapes and their representations in age-old sagas as well as in the writing of the poet Halldór Laxness, resulting in an evocative merging of air, land, glaciers, and sea.