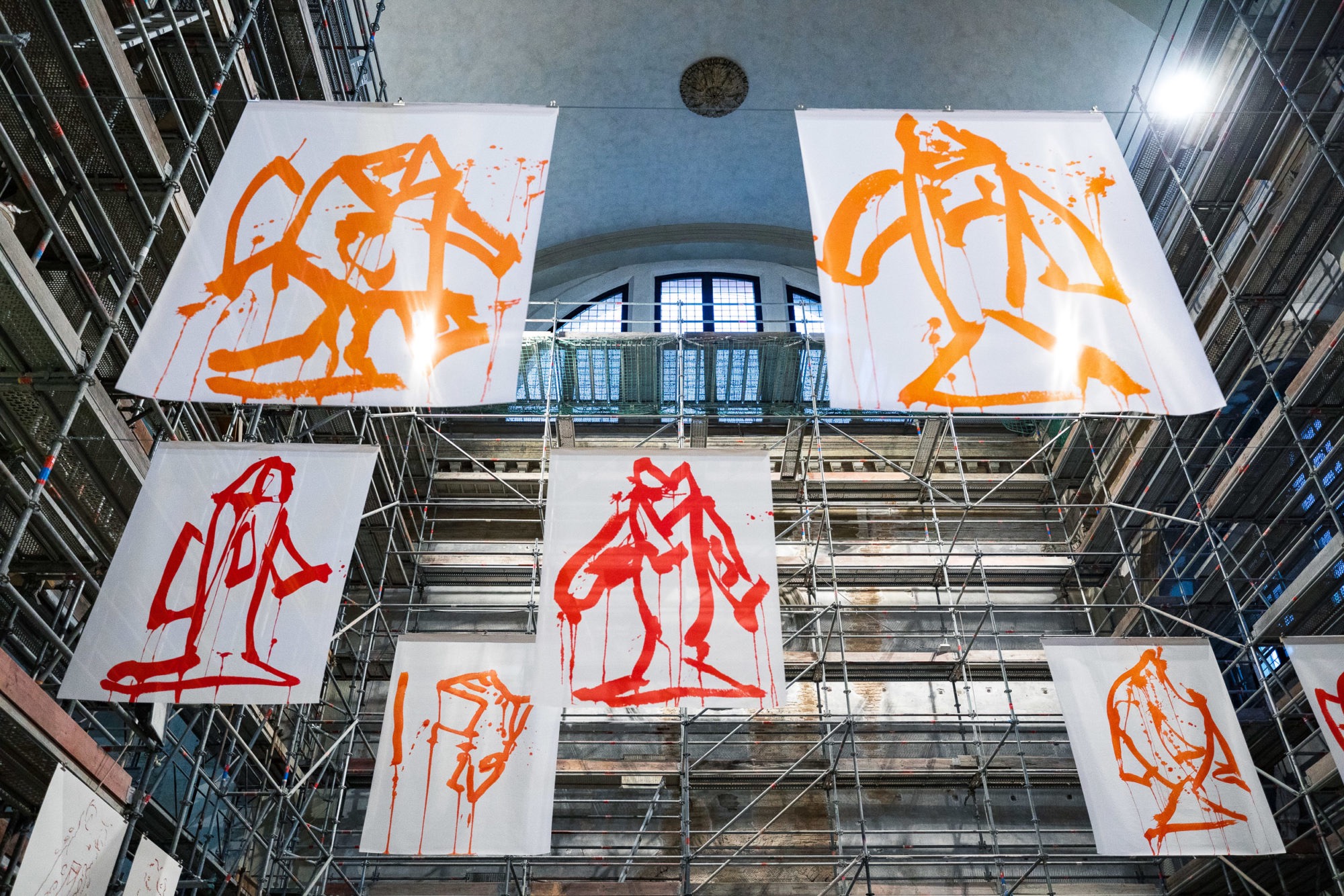 Throughout her more than 50-year artistic career, Joan Jonas has made ocular domination of the western information economy the starting point of her artistic endeavors. Like other women pioneers of the American art scene at the end of the last century, she insistently intertwined photographic media with the human body—and more specifically, her own. Today, the public sphere that she has contested by means of performance and moving images is changing rapidly—it demands new distortions. It similarly calls for new formats of presentation, beyond the traditional white box, theater stage, or booklet. This call is partly taken into account in Jonas’ solo exhibition “Moving Off the Land II”, curated by Stefanie Hessler for the newly founded Ocean Space—inside the restored and repurposed Church of San Lorenzo, in Venice, Italy.
The exhibition unfolds as a continuation of Jonas’ performance “Moving Off the Land. Oceans—Sketches and Notes” (2018), initially produced for TBA21–Academy’s Convening #2 in Kochi, India in 2016—and most recently presented in conjunction with her retrospective at Tate Modern last year. It was exclusively re-performed at Ocean Space during the opening days of the Venice Biennale. It departs from the history of Jonas’ interest in optics and, more specifically, in oceans as spaces for sound, light, and liveness. Thus, the performance embraces that waters have always been central to Jonas’ investigation in fluid communications—long before the Internet and its algorithms. By distorting analogue media, she visualizes the multilayered characteristics of social interaction: ways of seeing. This feature is also central to “Moving Off the Land II”, hosted by the nomadic TBA21–Academy. Its mission is to intertwine disciplines and develop new methods for research and knowledge production. Clearly Jonas is influenced by this perspective, including the fact that the human gaze upon water as a permanent resource must be contested. But is it?

Throughout the exhibition are five versions of Jonas’ “My New Theater” (1997–ongoing)—wooden constructions, some of which enclose the spectator in what seem to be small black box theaters. From multiple layers of projections emerge video alterations of previous performances, drained by footage of water and its fauna—in nature or contained in aquariums. In the transition from stage performance to performance for video—and finally autonomous video works—the layers of projections morph into watery masses that fill “My New Theater” to its edges. Upon entering, spectators add yet another layer with their own bodies. Around the installations, high up, bunches of Jonas’ comparably dry watercolor paintings of fish hang from the ceiling. Floating above eye level, these large papers recall the naive figures that Jonas painted during the live performance and in some of the video works.
Jonas’ interest in sensory organs, anatomic attributes shared by many of the world’s living species, recurs in her performances, videos, and paintings. Her seemingly spiritual approach contrasts intensely with citations from poets and researchers, all engaged with ethics and ecology—printed on A4 papers that hang on the walls. Mirrors referring to Jonas’ groundbreaking “Mirror Piece 1” (1969) are placed around the room to distort the scientific gaze. This impression is supported by light and sound emerging beyond the initial format of transmission: the video screening. In the overflowing “My New Theater”, media alters into forms and narrations of a seemingly nonhuman reality—which the spectator is invited to join.

A dominant perspective in the installations is that of organisms such as algae, octopodes, and jellyfish. The production process is quite transparent: Jonas’ old video works and performances are overlapped by new, staged readings by herself or a group of young performers, dressed in colorful inter-species inspired costumes. By referencing an era when earthly life was not yet segregated between land and water, Jonas seems to aim for a pre-anthropocentric ethics of how water—or the whole planet—might be shared. Imagining the point of view of these organisms, she highlights ways in which we aren’t that different after all: most of our nervous system and cognitive apparatus developed down there, Jonas argues. In theory, this claim could possibly counteract reigning structures of contemporary life and politics. The problem is that, looking at the world today, “all life” doesn’t “matter.” On the contrary life is definitely segregated—not only between land and ocean, or between humans and nonhumans—but also by race, economy, and geography.
Indeed, Jonas’ works beautifully intersect with the living spectators who wander in and out of the installations, successfully imbricate live performance and the performance of moving images. But at the same time, the most prominent characteristics of her practice—the confrontation of visual performance as such, image or not—are slightly dampened in the formal exhibition construct. In her previous works, Jonas has problematized the human perspective, albeit generously, through sensible confusion stemming from intertwined media. This time, the inherent power of alienation is exchanged for distancing reflections of times that have passed and, more specifically, the human construct of the evolutionary history of life itself.
Thus, the peaceful performative cinematic storytelling in which I, too, was also once an alga, is unavoidably intertwined with the colonial history of photography and film—media that Jonas uses without further confrontation. So it goes backstage: while I gaze upon the nonhuman waters, as interpreted by Jonas, the greenroom is owned by the anthropocene (text: Frida Sandström, image: Joan Jonas, “Moving Off the Land II”, 2019, commissioned by TBA21—Academy and co-produced with the Luma Foundation. Courtesy of the artist and Ocean Space, Venice. Photo: Enrico Fiorese.)