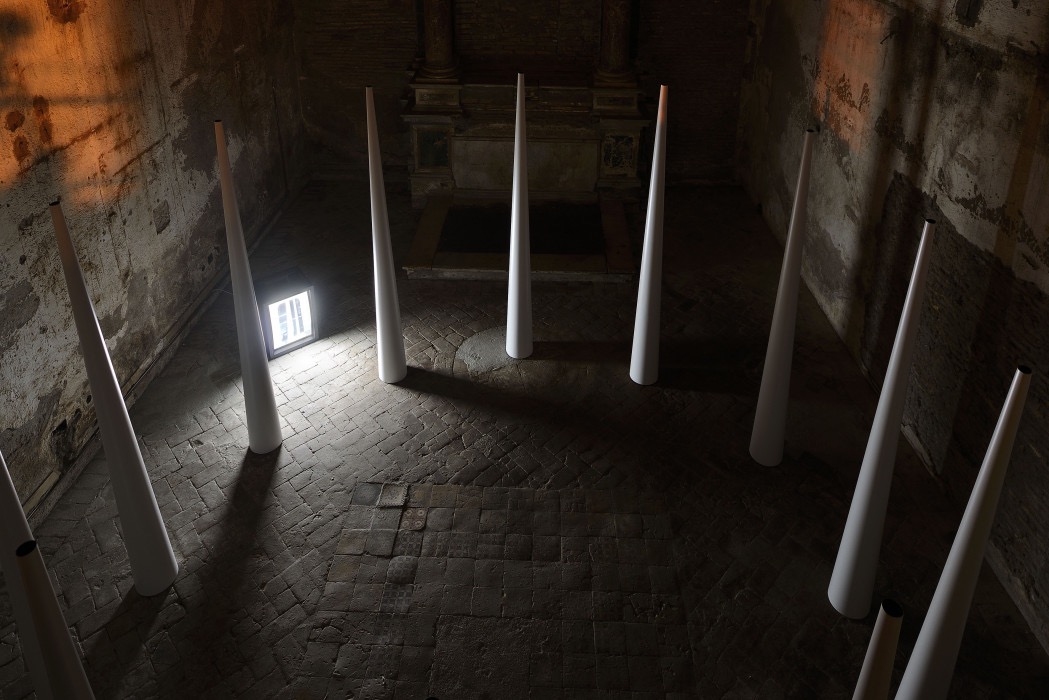 This exhibition brings together three collection works by Joan Jonas, a founding figure of video and performance art of the 1960s and 1970s. Presented in Dia Beacon’s lower-level galleries, the exhibition features the large-scale multimedia installation „The Shape“, the Scent, the Feel of Things“ (2004), which was commissioned as a performance for Dia Art Foundation in 2005–06, and two recently acquired works, „Stage Sets“ and „After Mirage“ (Cones/May Windows) (both 1976). Collectively, the three works present a compelling trajectory of Jonas’s oeuvre from the pivotal year of 1976, when Jonas decisively turned to translating nonlinear performance and video into performance installations, to the evolution of the artist’s work thirty years later. Opening on October 8, 2021, this exhibition brings together three seminal works by Joan Jonas, a central figure in the development of video and performance art. Occupying an expansive lower-level gallery of Dia Beacon, this presentation unites the large-scale multimedia installation The Shape, the Scent, the Feel of Things, originally commissioned as a performance for Dia in 2004, with two recently acquired works, Stage Sets and After Mirage (Cones/May Windows) (both 1976). Collectively, these three works illuminate an essential trajectory of Jonas’s practice from the pivotal year of 1976, when she first began creating performance installations, through to the ongoing evolution of the artist’s work decades later.  “Dia’s relationship with Joan Jonas has spanned more than twenty years, encompassing commissions, performances, video screenings, and these two essential additions to our permanent collection,” said Jessica Morgan, Dia’s Nathalie de Gunzburg director. “This major presentation gives remarkable insight into the artist’s revolutionary use of performance and video as well as the complex reimagining of her own work throughout her career.”  Jonas’s work primarily centers on intricate installations involving drawing, sound, video, and stage sets, often activated through performances that feature the artist and her collaborators, using props like masks and mirrors. Her radical video and performance works from the 1960s and ’70s are closely linked with emerging feminist critiques of the time, while simultaneously regarded as key pieces in the evolution of video art. Jonas’s anthropological interest in global ritual and performance customs has been integral to her decades-long practice, as has her engagement with diverse artistic and literary forms.  The exhibition includes Stage Sets and After Mirage (Cones/May Windows), two important works from the 1970s that were acquired by Dia in 2019. The year 1976 marked a decisive shift in Jonas’s practice, during which she begantransforming performance and video into performance installations. From that point forward, the artist conceived installations in tandem with her performances. These two early installations constitute palimpsests of works that preceded them, which the artist has continued to reanimate in an evolving self-reflexive process. Thus, although they are singular installations, a complex history of Jonas’s oeuvre is also inherently embedded, indexing antecedents as well as subsequent works from the decades to follow, including The Shape, the Scent, the Feel of Things. This marks the first presentation of both Stage Sets and After Mirage (Cones/May Windows) in the United States since their original iterations in 1976.  In 2004 Dia Art Foundation commissioned The Shape, the Scent, the Feel of Things, a performance staged in Dia Beacon’s lower level multiple times during 2005 and 2006. The multimedia performance conjures a hallucinatory space through voiceovers, dance, an original score by Jason Moran, and several mobile screens that project images ranging from Albrecht Dürer’s engraving Melencolia I (1514) to the landscapes of the American Southwest. The Shape, the Scent, the Feel of Things takes on an updated iteration in this current installation.  In the new exhibition at Dia Beacon, Jonas has reconceived all three works for the cavernous lower-level gallery conceiving a new, site-specific layout. “Indicative of Joan Jonas’s iterative approach to her performance installations, at Dia Beacon the artist has worked intimately with this unique space to stage newly imagined presentations of three iconic works,” said Kelly Kivland, curator. “Both site-specific and expansively self-referential, Jonas’s own hand is paramount throughout every detail of this installation.”  This exhibition will be accompanied by a monograph, forthcoming in 2022 and edited by Barbara Clausen, Kelly Kivland, and Kristin Poor. In addition, Joan Jonas: The Shape, the Scent, the Feel of Things, first published in 2006 as a companion to the original performance at Dia Beacon, will be reissued with a new statement by the artist.  About Joan Jonas: Joan Jonas was born in New York in 1936. She received a BA from Mount Holyoke College, South Hadley, Massachusetts, in 1958, and an MFA in sculpture from Columbia University, New York, in 1965. Her work has been exhibited internationally, with recent solo exhibitions at the Tate Modern, London (2018); Isabella Stewart Gardner Museum, Boston (2019); Fundação de Serralves, Porto, Portugal (2019); and Museo Nacional Thyssen-Bornemisza, Madrid (2020). Jonas represented the United States at the 2015 Venice Biennale and received the Kyoto Prize in 2018. Jonas is Professor Emerita at Massachusetts Institute of Technology, Cambridge (Joan Jonas: „After Mirage“, installation view, Sant'Andrea de Scaphis, Rome, February 17-March 19, 2016. © Joan Jonas/Artists Rights Society (ARS), New York. Photo: Roberto Apa, courtesy Gladstone Gallery, New York.)