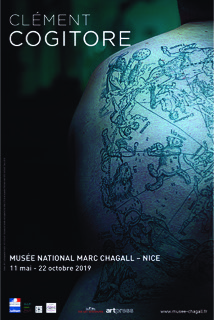 Over the past 15 years, the Musées nationaux of XXth century of the Alpes-Maritimes have placed contemporary art at the heart of their artistic and cultural programs: building bridges between the three iconic avant-garde art masters that were Marc Chagall (1887-1985), Fernand Léger (1881-1955) and Pablo Picasso (1881-1973) and 21st-century artists.
In spring 2019, Clément Cogitore (born in 1983) will be taking over the Musée national Marc Chagall and opening a new chapter based on motion picture, a process the museum already embarked upon in 2018, when it took part in the MOVIMENTA Festival and hosted for artists film-makers duo Joana Hadjithomas and Khalil Joreige. In addition, this year’s exhibition is the Musée national Marc Chagall’s contribution to the City of Nice's “L’Odyssée du Cinéma” initiative for celebrating the centenary of the Studios de La Victorine.
Video artist and filmmaker, Clément Cogitore produces expansive and unique work that draws on documentary images, still images and motion picture. This is an ode to images in all their many statuses and uses but also to the wonderment inspired by the processes of making and revealing them. In his films, photographs and installations, Cogitore combines a mixed assortment of visual components that shed light on contemporary society through staged structures, often inspired by timeless myths and archetypal forms. Like Chagall, another artist who drew regularly on narrative, his ending is not an end in itself, with the priority being to render the world around us present, rather than depict its realities (Daniel Sibony, “Chagall; Créer un monde qu’on jouisse de faire exister” in Fantasmes d'artistes, Odile Jacob, Paris, 2014.)
The tale structure and the use of allegory both link the two artists; this exhibition attempts to underline their formal similarities. First the shared interest in the idea of conflict with riot scenes (Ghost Horseman of the Apocalypse in Cairo Egypt, 2017), Anonymous gatherings (We are legion, 2012) and military uniforms decomposing in the desert (Digital Desert, 2015), showcased alongside the Russian painter’s war scenes and crucifixions. In these closed-off, shadow worlds, the subject is not only underlying violence but also utopia - Thomas More’s Nowhere Land - that exists outside time and place, a world destined to collapse and to exist in hope of redemption.
A second motif emerges around the idea of the sacred and related forms of faith. Chagall’s work is underpinned by Hasidic Jewish influences in which human lives and objects are tirelessly ritualised. In parallel, Clément Cogitore tells a story through images of contemporary ceremony (Élégies, 2014), an 18th-century celestial sphere (Zodiac, 2017) and prehistoric wall painting (Untitled, 2017). Images sourced from popular culture that serve as an extension of the permeable frontier that exists between the divine and the profane, the visible and the imperceptible.
Both artists share this urge to unify and reach the absolute, allowing them to build highly personal links with theatre, opera, music and dance. Les Indes Galantes is a lyrical and spectacular baroque opera ballet by Jean-Baptiste Rameau (1735). Clément Cogitore's adaptation of a short opening extract (2017) will be screened in the Museum concert hall, then the artist will stage the full opera in autumn 2019 at Bastille - Opéra national de Paris. Thus, it is another new chapter in his career as the young artist continues to approach the world as an endless source of inspiration.
In line with the Cinéma-Nice season, the exhibition will include film screenings scheduled in collaboration with contributors from the region’s cultural and artistic scene.
Curator: Anne Dopffer, General curator and Director of the Musées Nationaux of XXth of the Alpes-Maritimes museums, in collaboration with Gaïdig Lemarié, head of cultural partnerships.
Clément Cogitore is the 2018 winner of the Marcel Duchamp Prize awarded by the ADIAF - Association for the International Promotion of French Art. He was born in 1983 in Colmar, works and lives between Paris and Strasbourg.
In 2011, he was awarded the Grand Prix du Salon de Montrouge and was a resident of the Académie de France at the Villa Medici in Rome in 2012. His films have been selected and awarded prizes at many international festivals (Cannes, Locarno, Telluride, Los Angeles, San Sebastian, etc.). His work has also been exhibited in a number of museums and art centres in France and abroad (Palais de Tokyo and Georges Pompidou Centre in Paris, the ICA in London, the Museum of Fine Arts in Boston and the MOMA in New York).
In 2015, his first feature film, Ni Le ciel, Ni la terre, was awarded the Fondation Gan prize at the Cannes Film Festival – Critics’ Week, and was nominated for a César Award for the Best Film. That same year, he was awarded the BAL prize for emerging talent, followed by the SciencePo prize for contemporary art and the Fondation d'Entreprise Ricard prize for contemporary art in 2016. In 2017, his documentary Braguino was unanimously hailed as a success by critics, and garnered several prizes (best artistic contribution, best original soundtrack, etc.) and special mentions at international festivals.
In celebration of its 350th anniversary, the Opéra national de Paris commissioned Clément Cogitore to stage the entire production of the Les Indes Galantes ballet opera by Jean-Baptiste Rameau. The first performance will take place in September 2019.
Clément Cogitore's works have been acquired by many collections: Georges Pompidou Centre, Musée national d’Art moderne, Fonds national d’art contemporain, Fonds d’art contemporain of the City of Paris, FRAC Alsace, Aquitaine and Auvergne, MAC/VAL, Musée d’Art Moderne et Contemporain in Strasbourg, Daimler Art collection, NMNM Monaco and a number of private collections.