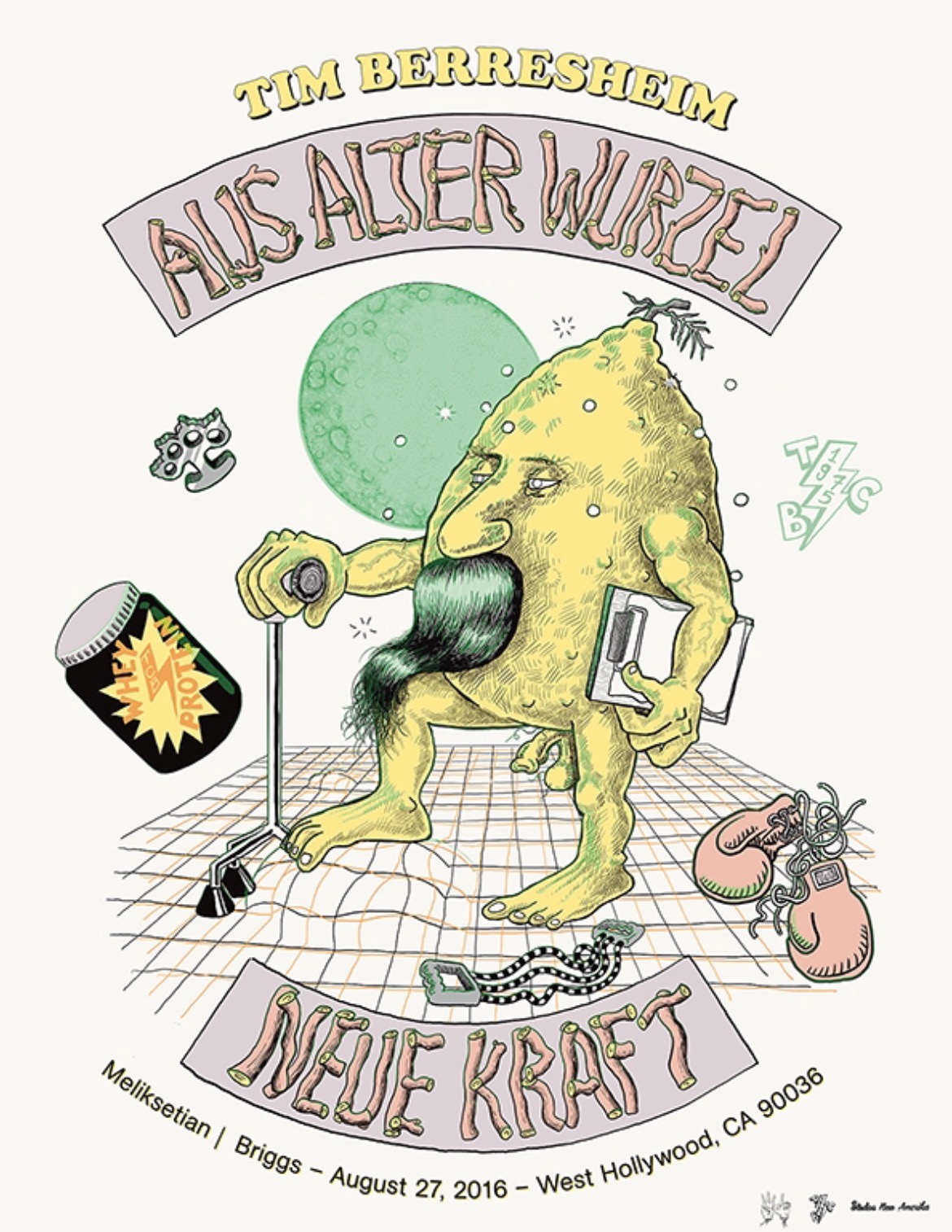 Meliksetian | Briggs is presenting Tim Berresheim’s first solo exhibition in the United States since 2010, when his “Phoenix - The Guilty Pleasure” series was shown in Los Angeles (Patrick Painter Inc) and his programmatic “Future Gipsy Antifolklore (What?!)” exhibition in New York (Marc Jancou). In keeping with the New York presentation, the title of the current exhibition “Aus alter Wurzel neue Kraft” [New Strength from an Old Root] can be read as a further programmatic affirmation of the present for Berresheim’s entire oeuvre – or more precisely of the transformation of traditional pictorial and representational concepts by means of the technical media-oriented possibilities of a present that is largely determined by the ongoing process of digitalization. At the same time it concerns a motto employed in the early 20th-century by German shooter's guilds that is usually illustrated by a new twig sprouting from a tree stump.

The “old root” referenced by the works is not only the panel picture that is still the most prominent presentational format in the field of fine arts but also the computer, which for the past fifty years has been available as a tool to generate images. But according to Berresheim it is still primarily being used in the sense of a “doubling of the world” as standardized by one-point perspective and thus not to the full extent of its potentials. The cited root is symbolized by a lemon with male attributes – still fragrant but, as can be seen on the exhibition poster, simultaneously dependent on a walking aid and notepad. Like the figure of the wanderer that appeared as the symbol of the aforementioned current transit phase in the 2014 solo exhibition “Auge und Welt” at the Düsseldorf Kunstverein, it was also prepared by the illustrator Andi Thissen. In conjunction with “Aus alter Wurzel neue Kraft,” the figures conceived by Thissen typifying central aspects of Berresheim’s aesthetic concept (such as ambiguity, coherence or additive knowledge) will be presented for the first time in the form of a separate group of prints.

These creatures furthermore appear on the body surfaces of one of the “Aspettatori” typical of the most recent work phase that, like the distinctive figures from the earlier works, are surrounded by selected objects, this time from the subject area of “strength training” (for example boxing gloves or protein supplements). In the case of the liner notes for the reissue of “Stürmer,” the 1981 debut album of the West German band F.S.K., power and strength were associated with cheerfulness and optimism. It is by no means coincidental that the resulting specific form of modernity by an anti-folklore band that had already emphatically said “Yes to the modern world” on their first single can be transferred to Tim Berresheim’s present miserabilism-defying works. The concentrated, largely abstract printed works in this exhibition further develop the already complex representations from the previous groups of works to the extent that the objects, which are identifiable here for the first time, are incorporated into the dense formations of fixed cone-shaped and linear traces as well as gaseous volumes. Differently characterized motion blurs are now woven together, not only resulting in the forgoing of an exclusive point of view and hence a de facto expansion of one-point perspective but simultaneously also represent the attempt to respond to the challenges of a present marked by an overwhelming and eminently complex concentration of data and an incessant flow of information by means of a traditional form of aesthetic production, the panel picture.