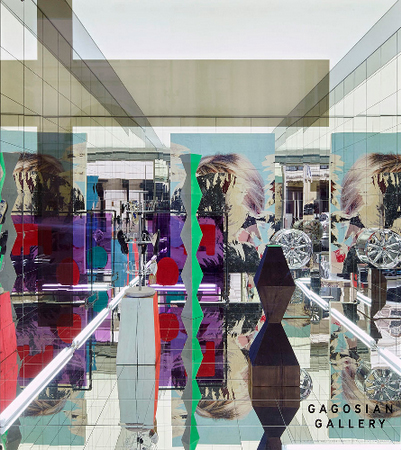 My work looks at our post-industrial age: found materials, pasted-over street advertisements, window displays, ephemera from social interactions – together they create a record of a temporal environment or situation (Josephine Meckseper).

Meckseper has devised an installation for the gallery’s street-level vitrine, informed in part by Walter Benjamin’s paradigmatic The Arcades Project. Looking into shop windows as he strolled through the typical arcades of his city, Benjamin compiled sensations and quotations of mid-nineteenth century Paris that effectively blurred the historical distinctions between high and low culture. In her window installation, Meckseper continues in this spirit, conflating items of art history and consumer history, and underscoring the enduring mechanics of what Benjamin termed “exhibition value“.

The mirrored interior walls of Meckseper’s vitrine reflect the objects contained as well as the outside street. Immanuel Kant's question of whether the mirror image is a thing in itself or a representation of individual perception pervades the enclosed yet infinite space, which includes painted wooden sculptures and a silvered canvas of a torn and layered street poster in the resistant spirit of affichage. Shoes, hung like ornaments on a chrome display tree, and a shiny hubcap rest upon modern sculpture pedestals. Meckseper utilizes banal materials, from denim jeans to car parts, confronting the "readymade" with the refinement of "high art“, though unlike her postwar predecessors, they maintain a pristine quality. Even a lurid purple toilet mat feels sumptuous and dignified when framed with plumbing pipe and hung like a painting.

Behind glass, commodities exist in an untouchable utopic state, magically becoming equal in social value. The Dawn (2013), a display case lit by fluorescent light, offers a view of familiar fragments in unfamiliar combinations: a cast concrete mannequin’s leg is placed with an “expressionist” abstract painting. In Shelf No. 32 (2005), Meckseper explores the way in which this same phenomenon relates to the desecration of windows and storefronts in protest culture. In the shattered mirror, the viewer confronts his or her own identity among the shards of political unrest.

Large-scale canvas works, digitally manipulated to take on a paint-like texture, function as both abstract compositions and contemporary readymades. Meckseper's paintings recall the lacerated surfaces of affichiste poster works by Jacques Villeglé and Mimmo Rotella, but here the multilayered images are of fragmented street billboards that echo Benjamin’s influential essay “The Work of Art in the Age of Mechanical Reproduction“. By both material and conceptual means, Meckseper provokes the unsuspecting flâneur to look more closely at the mechanisms of capitalism and the paradoxes that reside in the ruins of today's consumer culture.