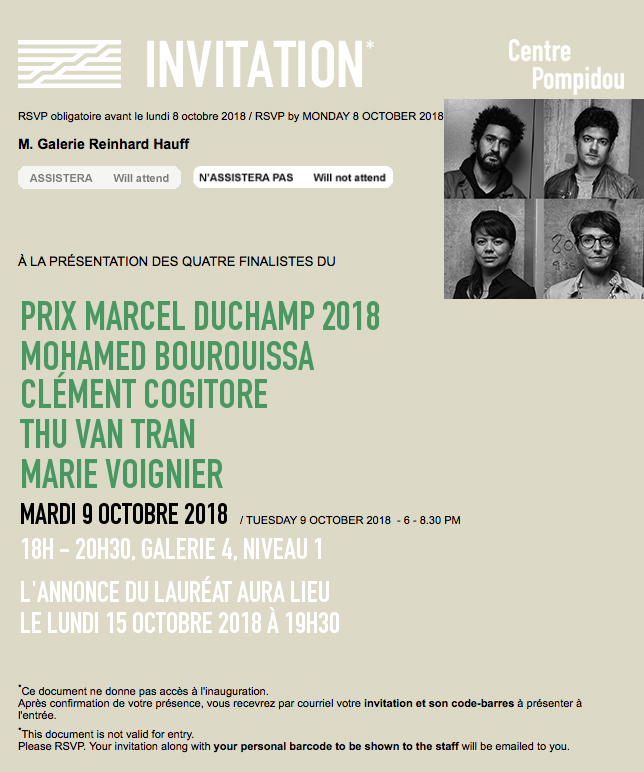 Established by the Association for the International Diffusion of French Art (ADIAF) and organised in partnership with the Centre Pompidou, this is one of the most prestigious contemporary art prizes in the world. This year’s edition offers an insight into the art scene in France, with the opportunity to discover the unique creations of Mohamed Bourouissa, Clément Cogitore, Thu-Van Tran and Marie Voignier.

The exhibition is a reflection of common concerns: rewriting the narrative in the midst of media saturation and applying new conditions to memory experiences.

Clément Cogitore: Since the end of the 2000s, Clément Cogitore has favoured the medium of film for his work, alternating between fixed and moving images, and between the cinematographic format and installations. The notion of ritual and manifestation of the sacred underpins all of his work, which is inspired by gatherings, community happenings and present-day expressions of faith, however erratic and aimless they may be. Amalgamating the norms of fiction and documentary, the artist also draws on the model of painting. Light and shade have an almost structural function in his work: from the uprisings in Tahrir Square in 2012 to the ecstatic crowds at a rock concert, from inside a collection of paintings to the desert landscapes of Siberia, the images of the modern world become visions.
For the exhibition, Clément Cogitore worked with recovered materials. The story of a female character is told through a series of anonymous and stereotypical scenes, which were obtained from image libraries around the world used by producers of promotional films. These empty vessels, whose meaning changes depending on how they are used, are taken by the artist to another place. Shown on a large LED screen, the film tests perception, messing with the usual slickness and immediacy of the media approach.