On View: ‘I Put on a Mask and I Become That Spirit’: Watch Artist Joan Jonas Combine Drawing, Video, and Performance to Create Her Seminal Works. As part of a collaboration with Art21, hear news-making artists describe their inspirations in their own words. 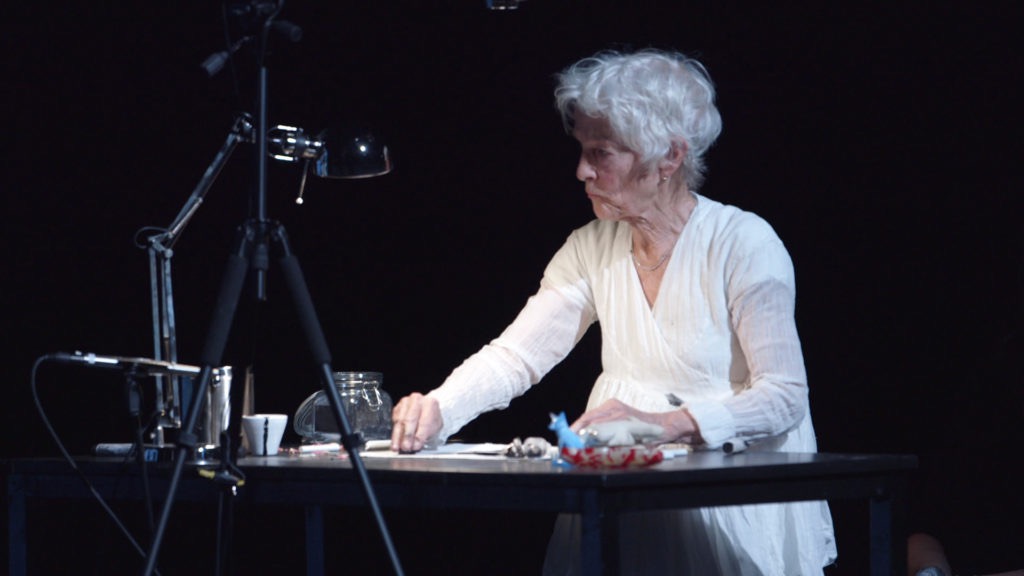 For the past five decades, Joan Jonas has created work that seamlessly blends live performance, drawing, installation, video, and music. In the process, she has become one of the most influential and multidimensional artists working today.

Now 82, Jonas is showing no signs of slowing down. This summer, two museums will showcase her work: the eponymously titled career retrospective “Joan Jonas” at the Tate in London and, across the pond, “Ice Drawing” at the MFA Boston.

In her piece Reanimation, originally performed in 2012, she incorporates manifold modes of communication ranging from chalk drawings to closed-circuit video projections, all in the company of an otherworldly musical score. In 2014, Jonas spoke to Art21 about her intensive practice and the many sources of inspiration that have informed her work.

Her collaborator for Reanimation is the pianist and artist Jason Moran, who admittedly struggled to keep pace with the octagenarian powerhouse. In the dual-interview, Moran tells Art21, “I wasn’t prepared for how rigorous the process is. And Joan really toils over this material through the text, through the images, through her movements, through the wardrobe, through the sounds that she’s going to make.”

The combination of multi-sensory expression is something Jonas has become known for since she first began performance-based work in the early 1960s. During a trip to the Southwest, the artist saw the Hopi Snake Dance, where the participants don masks, “It not only transforms the body but they become something else,” she said of the act. That mode of physical transformation led her to experiment with actual masks (some bought from erotic stores, others hand-made) and to embrace the intuitive side of performing live in front of an audience, “I put on a mask,” she said, “and I become that spirit.”

Jonas also learned how to articulate her modes of expression so that others can perform her conceptual works, while she stands back, conducting them in a sort of philosophical ballet. She told Art21 about re-working an early performance, Mirror Piece, where participants hold full-length vertical mirrors in front of them, facing the audience.

To this day, Jonas continues to conjure new ideas of space and performance in her works, defying categorization at every turn. Watch the full conversation between Joan Jonas and Jason Moran, which originally appeared as part of “Art in the Twenty-First Century” series on PBS, below.