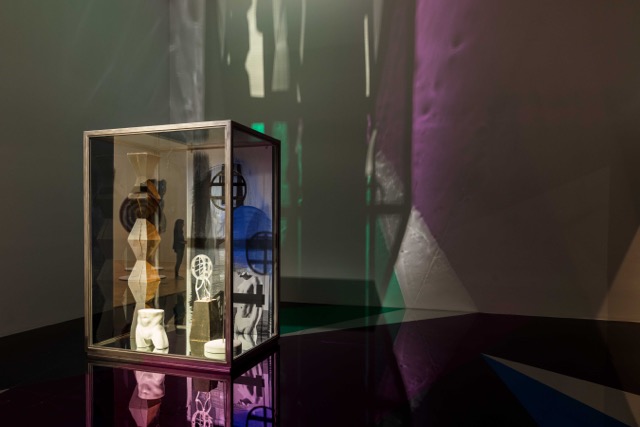 Josephine Meckseper’s vitrine works combine the artistic language of modernism with elements of retail shopping and advertising displays to demonstrate the influence of consumer culture on society. By showcasing both historical and contemporary artefacts, Meckseper’s stainless- steel and glass installations are windows into the collective unconscious of our time.

Las Meninas (2Xist), 2013, is part of a recent body of works that refers to the political dimension of modernist architecture and design in Germany during the Weimar Republic (1919–33), when the schools of the Bauhaus and Deutscher Werkbund operated before their destruction by the Nazi regime. The vitrine houses arrangements of early twentieth century–inspired sculpture casts and paintings in a shoplike display and is one of a number of works through which the artist critiques consumerism.

Also presented at the NGV Triennial is Meckseper’s new film PELLEA[S], 2016–17, inspired by the civil dissent in response to the inauguration of Donald Trump as President of the United States in 2016. A modern adaptation of Maurice Maeterlinck’s play Pelléas et Mélisande (1892), the film is shot in a mirrored pavilion that doubles as the psychological space of its protagonists. The room’s design serves as a link between the works.

Meckseper’s work has been exhibited internationally, including solo exhibitions at Migros Museum für Gegenwartskunst, Zurich (2009), and the Museum of Modern Art, New York (2008), and in various international biennials, including two Whitney Biennials (2006 and 2010), the Sharjah Biennial (2011) and the Taipei Biennial (2014). In 2007 a major retrospective of Meckseper’s work was organised by the Kunstmuseum Stuttgart. Meckseper’s work is represented in private and public collections internationally, including the Hammer Museum, Los Angeles, the Solomon R. Guggenheim Museum, New York and the Whitney Museum of American Art, New York.
Supported by Michael and Emily Tong.