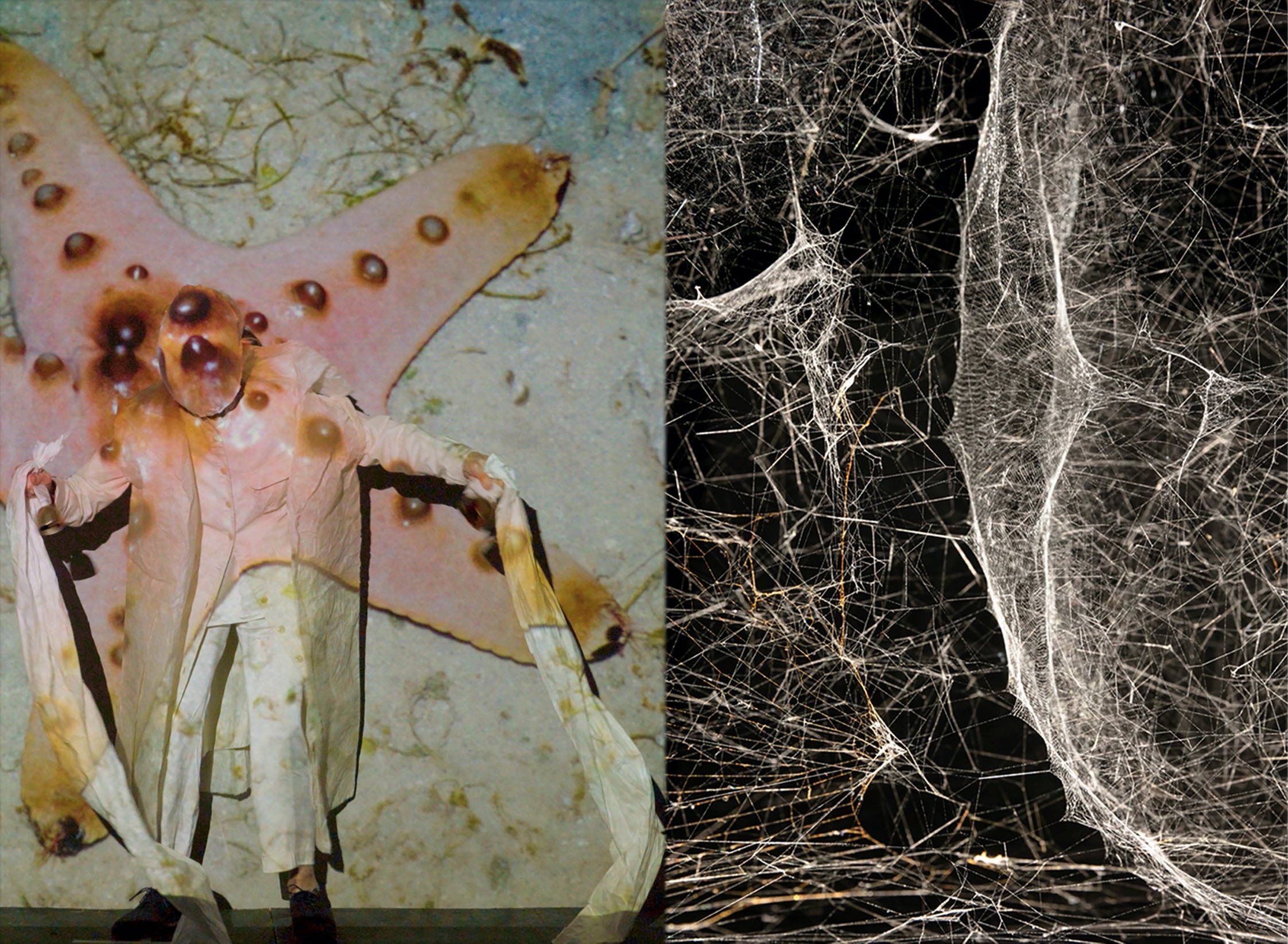 Thyssen-Bornemisza Art Contemporary and the Museo Nacional Thyssen-Bornemisza expand the themes outlined in the exhibition „More-than-humans“ through an ambitious experiential public program that will take place on October 30 and 31.
Curated by Stefanie Hessler, „More-than-humans“ brings together works by Dominique Gonzalez-Foerster and Tomás Saraceno, exploring the nonhuman: that which cannot be understood by the (rational) human mind. More-than-humans connects opera with the auditory dimension of spiders and encourages us to widen our perspectives of what culture is and who produces it.
The two-day public program draws out the vibrations and resonances between humans and nonhumans through diverse formats, including a roundtable discussion with seminal artist Joan Jonas, a special jam session with Niño de Elche improvising with a „Cyrtophora citricola“ spider and an intervention by Tomás Saraceno, a guided tour through Madrid’s Real Jardín Botánico looking for spiders, and a citizens’ science workshop, all of which will be punctuated by divination sessions with „Arachnomancy“ tarot cards and the app, designed by Studio Tomás Saraceno based on the oracle of the spider/web.

PROGRAM HIGHLIGHTS:
Wednesday, October 30, 19:00–20:30. Conversation: „Human and Nonhuman Intelligence“.
Celebrated artist Joan Jonas has focused on animals, the body, and mythologies throughout her exceptional career. Storytelling, movement and sound are important tools in her oeuvre, evoking that which cannot be explained by the (rational) human mind. Next February, TBA21 will bring Jonas’s exhibition „Moving Off the Land II“ to the Museo Nacional Thyssen-Bornemisza. This roundtable focuses on Jonas and brings her in conversation with founder of TBA21, Francesca Thyssen-Bornemisza, whose recent lecture performance „Sounds Too Many“ homes in on the auditory senses in the oceans; Andrea Zarza, sound archivist, curator, and founder of the label Mana Records; and Stefanie Hessler, curator of the exhibition and director of Kunsthall Trondheim, Norway.
Museo Nacional Thyssen-Bornemisza, Auditorium. Register here.

Thursday, October 31, 20:00–21:30. Arachno-concert: interspecies jam session performed by Niño de Elche.
The „More-than-humans“ public program comes to a close with an Arachno-concert: an improvised jam session between singer Niño de Elche and a „Cyrtophora citricola“ spider, whose spider web has been rendered sensitive as a musical instrument via Saraceno’s custom spider/web sonification devices, which amplify the spider/web’s vibrations, and feed vibrations back into the spider/web. Francisco Contreras Molina, known as Niño de Elche, is an artist, poet and flamenco singer. Considered one of the greatest innovators of flamenco today, his work is difficult to classify within a single genre. He combines flamenco with jazz and electronics as well as performance art, poetry, and dance. On this unique occasion, Niño de Elche jams live on stage with spiders. Here human culture meets nonhuman intelligence.
This concert is part of an ongoing series conceived of as communicative experimental encounters between species by Tomás Saraceno Studio. Introduction by Francesca Thyssen-Bornemisza and intervention by Tomás Saraceno. In collaboration with Radio 3.
Museo Nacional Thyssen-Bornemisza, Auditorium.

WORKSHOPS GUIDED TOURS AND READINGS IN VARIOUS LOCATIONS:
October 30and 31. Arachnophilia: workshops and activities with Studio Tomás Saraceno.
Stemming from the various interspecies works that Tomás Saraceno has realized in collaboration with spiders, these two days of interdisciplinary activities have been programmed with the intention to raise awareness about the profound communication power of animals and specifically insects.
The program begins with „Tuning into Other Worlds: Spiderwebs and Invertebrate Vibrations“ a workshop for people interested in spiders and various other insects, sound, field recordings, and DIY scientific experimentation. Under the direction of Dr Roland Mühlethaler, entomologist and specialist in animal vibratory communication, and researcher Dr Ally Bisshop, both of whom work in Tomás Saraceno Studio’s Arachnophilia department, participants build simple electronic devices that allow them to listen to the world of vibrations produced by spiders, insects, and other invertebrates. These devices created during the workshop can then be used in the subsequent „Cartography of the Spider/Web: Anti-Extinction Mapping and Fieldwork“ tour in Real Jardín Botánico to find spider/webs that cohabit our urban spaces.
Additionally, in collaboration with Tomás Saraceno Studio, Ania Puig will offer „Arachnomancy Readings“: various individual divination sessions, contemplating the future with cards and app designed by Tomás Saraceno Studio based on the oracle of the spider/web.
Different times and locations Museo Nacional Thyssen-Bornemisza, Real Jardín Botánico and Medialab-Prado.
All activities are free of charge, and count with simultaneous translation English-Spanish, courtesy of TBA21, however advance registration is required.