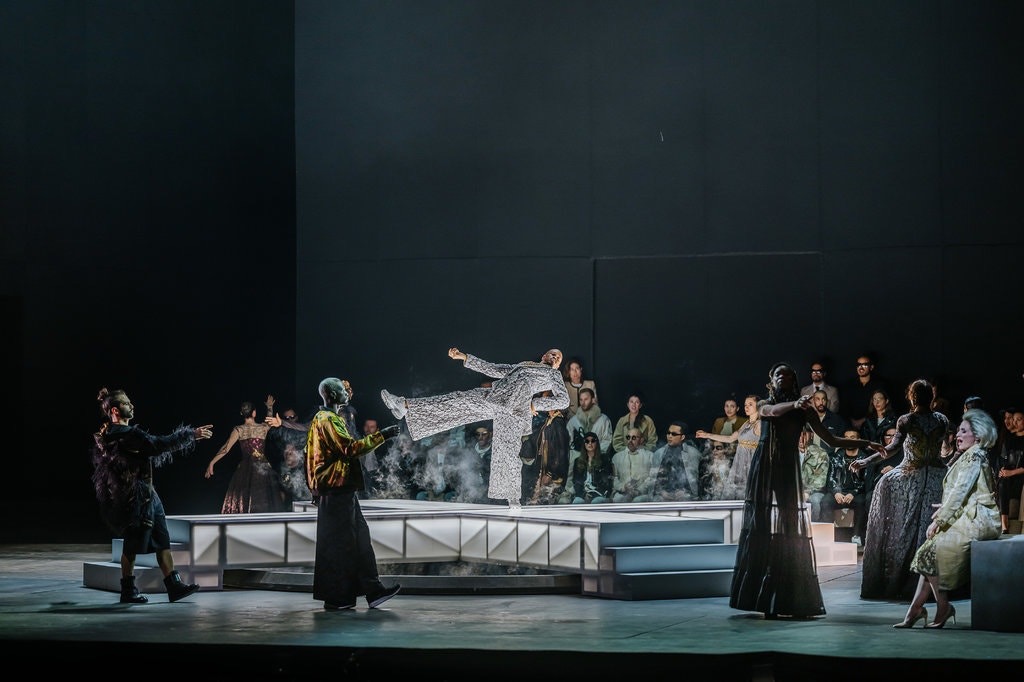 The New York Times: “Vogue Dancers Subvert a Baroque Spectacle at the Paris Opera: Rameau’s “Les Indes Galantes” was designed to show the triumph of Enlightenment order over the exotic “other.” Can hip-hop dance make it feel less toxic?”

PARIS — The choreographer Bintou Dembélé was at the Paris Opera one recent afternoon, rehearsing a new production of Rameau’s rarely performed Baroque spectacle “Les Indes Galantes.”
Four vogue dancers had formed a semicircle onstage, each elevated on a gray slab. They had contracted their torsos, rounding their backs while looking away from the audience.
Their poses seemed passive rather than confrontational, and Ms. Dembélé, 44, a pioneer of French hip-hop dance, suddenly spoke up. “They cannot be in that position while the word ‘slavery’ is being sung,” she said.

“Les Indes Galantes,” which opens on Sept. 26, is among the premier examples of 18th-century “opéra-ballet,” a melding of loosely plotted sung narrative and extravagant dance sequences. At its 1735 premiere, the work was designed to represent the triumph of French Enlightenment order over the “other,” depicting a series of stories of love and virtue set in exotic realms. (“Indes” was, at the time, a term used to describe all non-European locales.) Its score is among Rameau’s most voluptuously colorful and vibrant.

To audiences today, however, its cast of Turkish, Peruvian, Persian and Native American characters can seem hopelessly hackneyed. And its French-gallantry-conquers-all plot can come across as propaganda for colonialism. (One of the acts is called “The Savages.”)

The scene Ms. Dembélé was rehearsing revolves around two Persian men; each falls in love with the other’s female slave. “Love is necessary in slavery,” says one of the masters. “It sweetens the hardship.” The libretto is full of offensive moments like this. Ms. Dembélé’s choreography suggested that such moments have to be subtly subverted.
But can “Les Indes Galantes” subvert the ideology it was written to uphold? Ms. Dembélé and Clément Cogitore, the artist and filmmaker making his stage debut as the production’s director, are betting that it can.
“I hope to reveal what the text refuses to name, to show its misunderstandings,” Mr. Cogitore said in an interview. “A stereotype is a character who suffers because we haven’t listened to his story.”

The production originated with a video short Mr. Cogitore created in 2017 under the auspices of the Paris Opera’s Third Stage program, which is designed to connect opera and ballet with new audiences. Set to “The Dance of the Peace Pipe,” from the fourth act of “Les Indes Galantes,” the film was a collaboration with Ms. Dembélé and a group of dancers specializing in the vigorous street style called krump.
Featuring a dance-battle-like circle on the stage of the Opéra Bastille here, the film’s energy escalates as those on the outskirts join the dancers in the center with short staccato arm jabs and chest pops, mounting to a brio that appears both ecstatic and angry.
“I was deeply moved when I saw Clément Cogitore’s film,” Stéphane Lissner, the company’s director, said in an interview. “He took the subject of ‘Les Indes Galantes,’ its condescension toward the ‘other,’ and turned it on its head.”
Given the problematic libretto, Mr. Cogitore and Ms. Dembélé knew that the dance sequences would have to be central in a staging of the full work. “I didn’t want the dancers to be ornamental accessories to the protagonists,” said Mr. Cogitore. “They needed to participate in the action, to have real roles, even if they remained silent.”

So the dancers, some from Ms. Dembélé’s Compagnie Rualité, have been enlisted to move the story along and shape the stage environment throughout. In the third act, for example, after the master-slave love quadrangle, a break dancer performs rapid head and hand glides center stage. This sequence is usually a happy celebration for the couples, but these whirlwind turns feel like they reject that narrative. The entire chorus then walks onstage. When a diverse group of children steps out of the crowd and starts moving in hip-hop shuffles and steps, the dance seems to transform the scene into one of community and belonging.
Some choreographed, stylized gestures accompany the singing, as is the tradition in opéra-ballet. But Ms. Dembélé has given the dancers broad liberty in their solos: “We’re waiting for the part where we can bust out into our own thing, with total freedom,” Cal Hunt, a flex dancer in the cast, said in a telephone interview.
Dancers of street and club styles, including vogueing, house, break, flex and electro have joined some of the original krumpers from Mr. Cogitore’s film. Ms. Dembélé said that these forms, unlike the decorative divertissements of Rameau’s time, “resonate with what’s going on in the street. They developed as a means of survival.”
“In the movement of the body, we can give expression to what we have lived,” she added. “I have to confront my own frustration, and the frustration of new generations who have not found their place. Gathering people through dance transforms that anger so we can tell these forgotten stories.”
It is believed that Ms. Dembélé, whose parents are from Senegal, is the first black choreographer to be engaged by the Paris Opera in its 350-year history. But this has gone unmentioned in the company’s publicity materials, as well as in the mainstream French press.
France’s model of universalism largely ignores the particularities of racial identity; the word “race” was struck from the constitution last year. Yet this model of assimilation has been widely perceived as failing immigrant communities, overlooking the historical use of race as a category in the country’s former colonies.

Some have looked toward dance as an art form capable of acknowledging this tension. “In French institutions, dance avoids the pitfalls of the dialogue, working instead through nuance and suggestion,” Felicia McCarren, a historian of French hip-hop at Tulane University, said in a telephone interview.
While in the United States, hip-hop dance has become increasingly commercialized, the French government has been financing hip-hop as both an artistic and pedagogical practice for three decades, making the form central to debates about anti-racism. Hip-hop dancers in France have the employment status of artists (“intermittents du spectacle”) and the right to state-issued income between projects.
But street styles have rarely made it onto the Paris Opera’s stage, still seen by many as the heart of the French choreographic patrimony. “This production is the sign that there is a new visibility of minority choreographers and dancers,” Isabelle Launay, a dance historian, said in an interview.
And Ms. Dembélé has opened the door for others. “We knew we could embark on this project with her,” said the voguer Giselle Palmer, part of the “Indes Galantes” cast and possibly the first openly transgender woman to perform at the Paris Opera.
“I always thought of the Opera as closed off, reserved for ballet,” said Nadia Gabrieli Kalati, a krump and house dancer whose family is from Cameroon. “This inclusion of other styles is not only great for dance. It shows that difference can be a force, that difference can unite us all.” (Text: Madison Mainwaring, photo: Dancers of street and club styles, including vogueing, house, break, flex and electro, are part of the cast of Rameau’s “Les Indes Galantes” at the Paris Opera.
Credit: Alex Cretey-Systermans for The New York Times.)