The Inamori Foundation in Japan, Kyoto 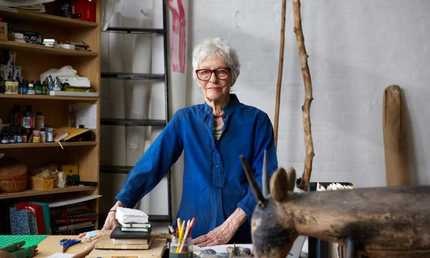 The Inamori Foundation in Japan has revealed the winners of this year’s Kyoto Prize, which is presented annually in each of the following categories: advanced technology, basic sciences, and arts and philosophy. The recipients – neurologist Karl Deisseroth, mathematician Masaki Kashiwara, and artist Joan Jonas – will each be presented with a twenty-karat gold medal and more than $ 900,000.

Born in New York in 1936, Jonas originally trained as a sculptor but soon became a pioneer of performance and video art. Deeply influenced by the work of Trisha Brown, with whom she studied dance, as well as by John Cage and Claes Oldenburg, Jonas is known for producing work that engages with myths, rituals, poems, folk songs, and texts from around the world.

“Creating labyrinth-like works that lead audiences to diverse interpretations, she hands down the legacy of 1960s avant-garde art by developing it into a postmodern framework, profoundly impacting artists of later generations,” the prize said in a statement.

The recipient of numerous honors and awards, Jonas represented the United States at the Fifty-Sixth Venice Biennale, which took place in 2015. She also received the Lifetime Achievement Award from the Solomon R. Guggenheim Museum in 2009. A longtime educator, Jonas has taught at the State Academy of Fine Arts Stuttgart in Germany and the Massachusetts Institute of Technology for many years. An exhibition dedicated to the artist’s work – the largest survey to be held in the UK – is currently on view at Tate Modern in London.

Founded by Kazuo Inamori, chairman emeritus of the Kyocera Corporation in 1984, the international award honors those who have made significant contributions to the scientific, cultural, and spiritual betterment of mankind. In March of next year, Jonas will give a lecture at the Kyoto Prize Symposium, which will take place in San Diego, California (image: Joan Jonas in her studio in New York. Photo: Mike McGregor for The Observer.)