As part of a collaboration with Art21, hear news-making artists describe their inspirations in their own words. 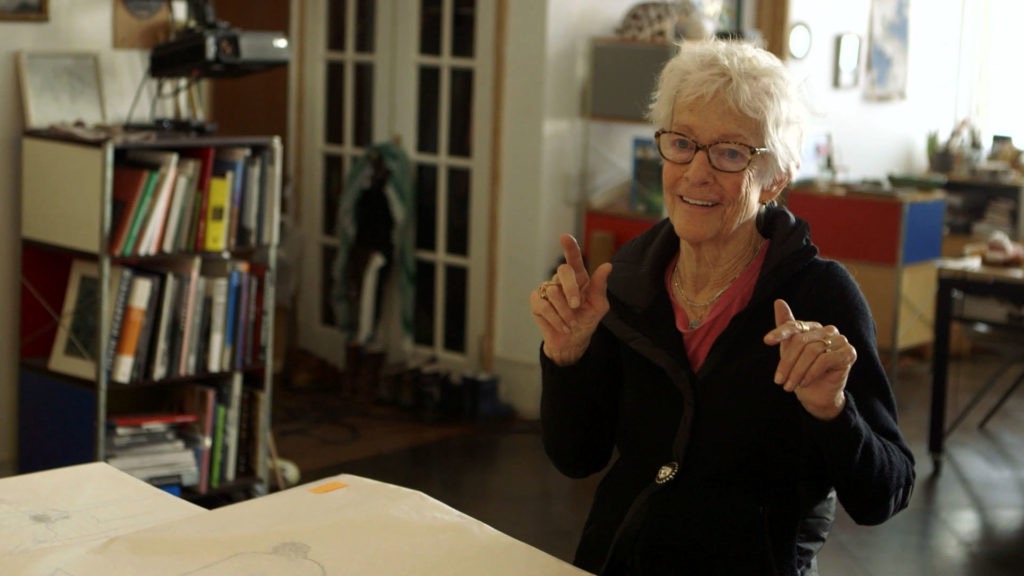 For the artist Joan Jonas—a virtuoso dancer, composer, and sculptor—drawing serves as both a conditioned mode of practice, and sometimes as a final product.
“It’s like practicing the piano,” she said in an exclusive interview with Art21 back in 2014. “The first ones that I do often don’t come out, so I have to practice and do it over and over again until I get what I like.”
In the video, Jonas is shown in her Manhattan studio preparing works to be featured in Robert Ashley’s opera “Celestial Excursions“. She’s churning out reams of paper covered in painted sketches of her dog Xena, as well as her pet owl.

To challenge herself, Jonas uses long sticks affixed with brushes to apply paint, distancing herself physically from the canvas and increasing the abstracted elements of her work.
At the age of 83, Jonas is still producing work at an impressive rate and mounting new international exhibitions.
Right now at the Thyssen-Bornemisza contemporary art center in Madrid, “Joan Jonas: Moving Off the Land II,” is on view, and reflects her continued interest in the ocean and her concern with the delicate ecosystems that are contained within expansive bodies of water. The work was first shown during the 2019 Venice Biennale, where it inaugurated a new venue called Ocean Space.
Watch the video, which originally appeared as part of Art21’s Art in the Twenty-First Century series, below. “Joan Jonas: Moving Off the Land II” is on view at Museo Nacional Thyssen-Bornemisza in Madrid through May 18, 2020 (text: Coroline Goldstein; image: Production still from the Art21 "Extended Play" film, "Joan Jonas: Drawings." © Art21, Inc. 2014.)