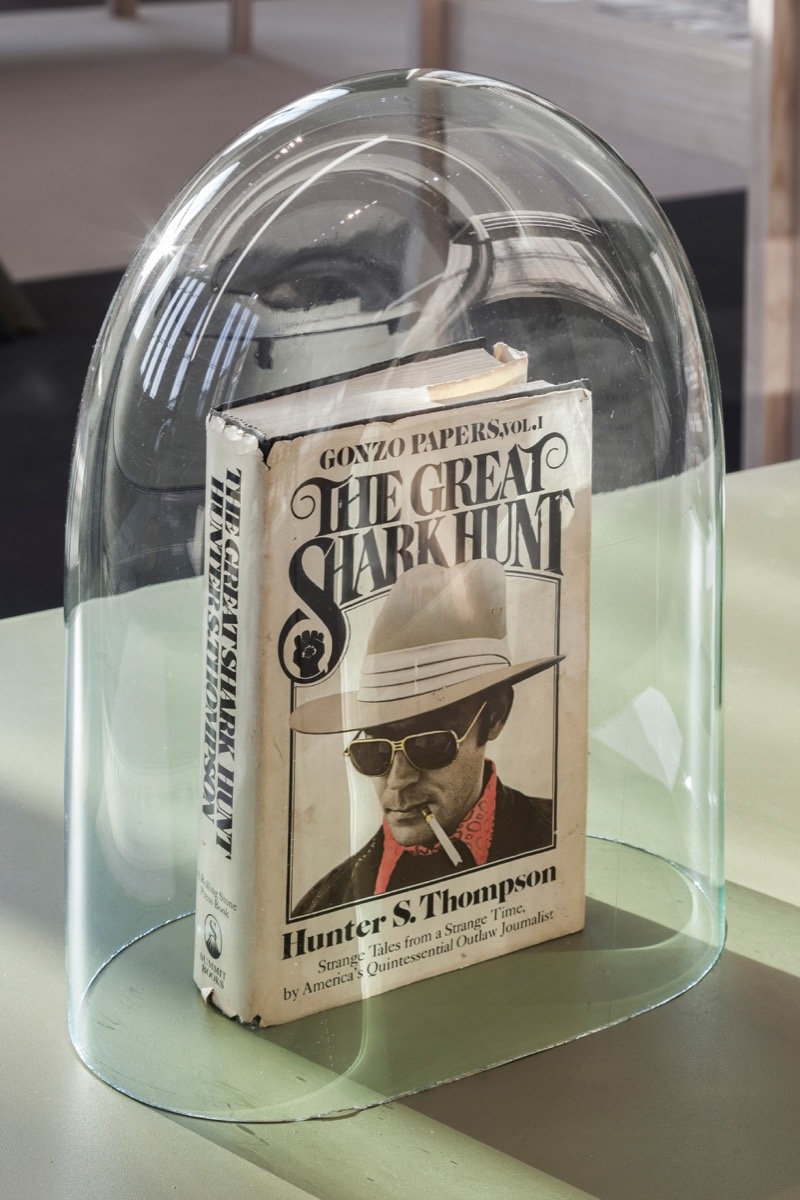 [...] „Josephine Meckseper would certainly agree. For her installations, the German-born New Yorker gathers readymades—everything from hosiery to old advertisements to sculptural models—which she thinks of as “as signifiers and representations of capitalism.“ Bringing them together in her mirrored displays is “like looking at culture through collective eyes, and he eyes of future generations.”

While not a collector of things, she considers herself rather “a temporary custodian of objects,” in part because, she says, “I grew up in a large, old house in Germany filled with my parents’ collections of old 19th-century toys, contemporary art, and rooms filled with bookshelves. Subsequently, I don’t feel the urge to collect.”

Interesting that for us the word collect has come to mean own. Meckseper might not consider herself a collector, but she does accumulate things—mostly books. ( “Primarily,” she says, “because I read them.”) To the Brussels show, she loaned a first edition of Hunter S. Thompson’s The Great Shark Hunt, an overt cultural marker—it compiles the late author’s gonzo political journalism—that functions, too, as a comment on the current cultural and political situation. It is also, inevitably, nostalgic, as Meckseper herself obliquely acknowledges: “Now that we have entered a digital age, the book as a physical object containing narratives and content on a page feels even more significant.”
Meckseper’s practice provides a glimpse into the way certain people transform ordinary objects that are invested with cultural sentiment into art. Today we call those people artists. In the past, it was shamans or priests who transmuted common, artisanal things into magical entities. Which goes a long way toward explaining why the Dutch artist Folkert de Jong collects tribal art along with contemporary works. Pieces like the Indonesian fertility sculpture, with, de Jong writes, “funky hair and oversize penis,” which he showed in Brussels, put him “in contact with something primal and connect me to the fact that we are part of nature.”

Dawood is himself the owner of an assortment of ancient Egyptian magic and occult items. “I have a shabti, which is a ceramic glazed mummy, in blue,” he tells me, “and a beaded mummy mask, as well as two or three magical amulets.” At “Mementos,” you could gaze upon his pair of kohl-rimmed eyes, from an ancient Egyptian sarcophagus, mounted on a brown Perspex stand, and which he bought in Paris. The platitude of the eyes being the windows to the soul comes to us from ancient Egyptian magic, he tells me. His text adds, “I like the idea of something from the ancient past meeting a 1970s future that doesn’t quite work out.”

It’s the way of all things: They travel through time accruing to this or that person, and live out an awkward future with objects from other eras. Perhaps it takes the eyes of an artist to recognize the magic in connecting them anew.“