Group Show „The Women Behind“ with Julika Rudelius

Museum on the Seam, Jerusalem, ISRAEL 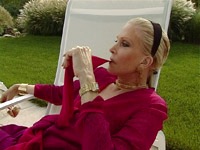 The group exhibition exposes us, the viewers, to the inner world of women, while identifying cases of subjugation and discrimination that mostly occur in the private and public spheres. The images portray a harsh reality that oblige us to open our eyes and boldly observe them closely, and thus to express our solidarity with this struggle.
The exhibition seeks to increase awareness for women’s equality and liberation, and through the series of images, to deconstruct the power structures that constitute gender relations in our society, while observing the latent social and cultural strata, thus exposing global manifestations of exploitation, abuse and exclusion.

The works featured in the exhibition refer the viewers to a social construction of a harsh reality that has become the norm of a patriarchal society, in which authority and institutionalized power are still concentrated in the hands of men. A society that pre-determined the rules of the game for many women, rules of subjugation that inflict suffering and discrimination, and place them in a cycle of fear, locked behind a veil of violence and prejudice.

While human rights and feminist movements are far more active today than in the past, increasing the hope for better days to come, the Museum on the Seam has committed itself to changing this long existing reality, by raising awareness and sensitivity and conveying a message of gender equality.