The categories of “private” and “public” as fundamental definitions for our understanding of society may have become more relevant than ever before. Today the relations between “private” and “public”, respectively between “subject” and “society” shift to a general public, which is basically shaped by the interests of a very few (a post democracy, like pointed out by theorists like Colin Crouch* or Henry A. Giroux**) Furthermore the lines between both categories dissolve evidently since the digital revolution forces an exponential interconnectedness of public respectively corporate interests with all aspects of human life. Tracing the roots of this political concept, we do not only find the term “dialectic”, but also the distinction between “public” and “private” in Ancient Greece. At the very beginning of the distinction between these two spheres, there was a term that is still very common today: Idiot, or Greek ἰδιώτης, idiōtēs. Whereas in most countries today this term denotes a person, who is stupid, insane or at least unable to do something seemingly easy, in Greece it is just a person, who refuses to take an official role in the organisation of the Polis, even if he had the capability to do so. In short: An “idiot” is a private citizen. In being that, he benefits from a public sphere, that allows him to be private, but he does not actively present his political ideals in society. A big number of idiots is a very plausible fundament for a worldwide establishment of cooperate and political leadership. Relying on satisfied consumers, who do not bother about public concerns it is easy to reconfigure society in any way serving to gain more power, no matter if the elite wants to implement a neoliberal system or an autocracy. But what about the role of the artist in this set up today? Since modern times he has always had to search the public in his specific cultural sphere: the art world with its special places – heterotopias like the white cube of a museum or gallery. But can there be any other tasks for artistic operations than searching for beauty, personal expression and the production of artworks for the joy of private customers? Are there other reasons for artistic activity? Is there a wider public to address? Are there other messages of art that directly interact with public processes? The exhibition series »Idiopolis« - Dialectics between subject and society follows these questions. It examines the tension between the initial, private impulse of an artist to take action and his final statement to a wider public. The first edition of »Idiopolis« (ed.1) was set in an abandoned house, placed in Metaxourgeio, a district of Athens in 2013. In that case the categorical framework was very clear: A former private space with all its traces of private living had to be turned into a public space showing artistic interventions. This premise led to a lot of works that provided a very close relation to the specific architecture and setting of that given house in its social environment and history. ´ Leaving behind architectonical and social conditions of one certain place, the neutral atmosphere of an institutional exhibition place such as State of Concept makes the dynamics inside the dualism “individual subjectivity” - “collective consciousness” easier to comprehend. In the second edition of »Idiopolis« (ed.2) outstanding works from artistic operations worldwide as well as in Athens are on view. The aim is to present an array of positions that operate with different strategies of communication, participation and intervention in society today. From generating alternative communities, to documenting and transforming political “battlegrounds” up to interventions in urban surroundings, there is and has always existed a broad research by artists on the simple question: “How can I interact?”. We hope this exhibition will give some valuable insight views on the topic and open up the reflection about the effectiveness of each strategy. Therefore we have tried to collect some remarkable examples of artistic statements of the recent years and bring together some active protagonists of the scene. A lot of them come to Athens not only to gather for the exhibition, but also to bring themselves up to date the State of the Art right here, right now. They all seem to share the same conclusion: you have to be an “idiot” today, if you do not take responsibility in public concerns. In this sense “idiot” is simply defined like this: being ignorant because a lack of common empathy. Stephan Klee * Colin Crouch: Post-Democracy, Oxford Press 2004 ** Henry A. Giroux: America at War with Itself, City Lights 2016 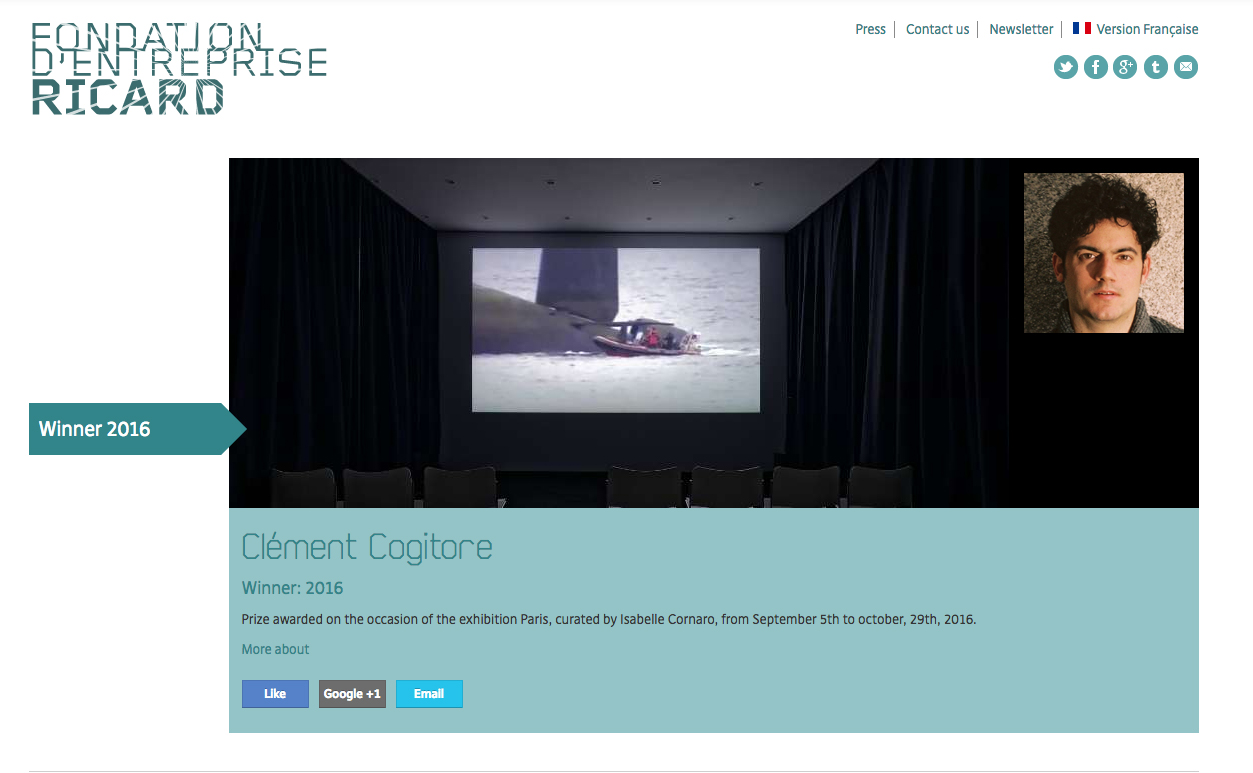 Prize awarded on the occasion of the exhibition Paris, curated by Isabelle Cornaro, from September 5th to october, 29th, 2016.