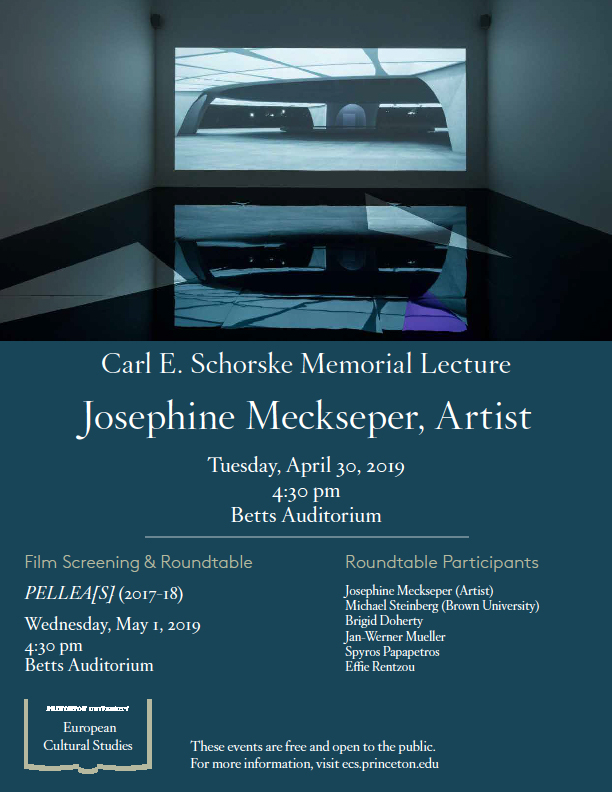 The Program in European Cultural Studies (ECS) is delighted to announce that Josephine Meckseper will deliver the program’s inaugural Carl E. Schorske Memorial Lecture on April 30, 2019. The lecture is named in honor of the founding director of ECS, eminent historian Carl E. Schorske (1915-2015).
Born in Lilienthal, Germany, Josephine Meckseper is an internationally acclaimed New York-based artist whose large-scale installations and films have been exhibited in biennials and museums worldwide. Represented in the permanent collections of museums including the Whitney Museum of American Art, Solomon R. Guggenheim Museum, Museum of Modern Art, and Metropolitan Museum of Art in New York, as well as the Kunstmuseum Stuttgart, Migros Museum, Zurich, and the Princeton University Art Museum, Meckseper’s work explores relationships among the formal languages of modernist art, music, and architecture, the social and political systems of European and North American modernities, and the media landscapes of global late capitalism. In this lecture, the artist will discuss the development of her work since the 1990s, and introduce her recent film, „PELLEA[S]“ (2017-18).
Reception to immediately follow. Open to the public.