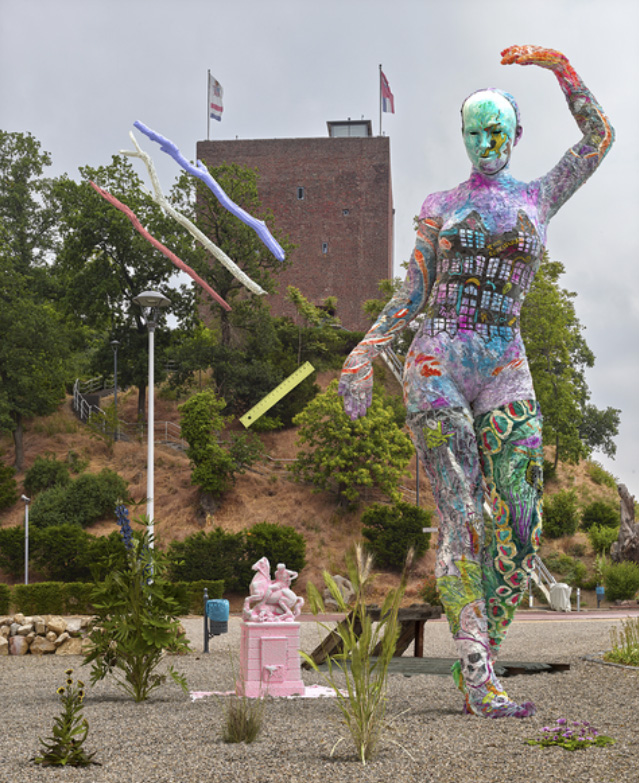 In the third part of the exhibition series "Aus alter Wurzel neue Kraft", Tim Berresheim reinserts some of his central themes back into the context from which they are derived. In doing so, the artist reveals autobiographical references of his work and creates several layers of feedback between the digital space of his works and the environment he grew up in: Wassenberg and Heinsberg, two small German towns near the Dutch border. After stops in Los Angeles and Aachen, the exhibition suite entitled "Aus alter Wurzel neue Kraft" now gives rise to a special symbiosis between Berresheim's art and the venue in which it is on display.
Since the early 2000s, Berresheim has been part of an international driving force in computer-based art. In his digitally generated models of contemporary visual cultures, with all their movable, hybrid elements from the history of art and images, he explores immanent creative spaces and scope, meanings and chances for a future artistic practice. Always on the cutting edge of what is technically possible, he continues to seek out new pictorial compositions. His artistic research combines high tech and a DIY mentality that already characterised the early computer art pioneers of the sixties or the Homebrew Computer Club, for instance. In his artistic archaeology of the present, he roams through the archives of what already exists – appropriating and transforming the material in order to speculate about its future potentials and turning artistic practice into a continuous learning process. After all, as Marshall McLuhan once pointed out, the qualities of new media become apparent when they are confronted with older ones.
For the exhibition in Wassenberg und Heinsberg, Berresheim now also takes up the emancipatory and educational tradition of computer-based art as represented by Experiments in Art and Technology (E.A.T.), the Whole Earth Catalog (WEC), Seymour Papert or the cyberneticists Gregory Bateson and Heinz von Foerster, among others. Together with the pupils of two schools that he himself attended – Gemeinschaftsgrundschule am Burgberg in Wassenberg and Kreisgymnasium Heinsberg –, the artist developed a comprehensive set of tasks and teaching support. The results of painting, drawing, sound shaping, digital and chemical image creation, photogrammetry, computer science and data processing as well as location scouting are pieced together by the artist and complemented by more of his works to form an aggregated work of art.
Within the structure of the decentralised exhibition at selected locations throughout Wassenberg and Heinsberg, this generates a series of complex levels of reflection on the location, the works by the children and young people, the visual culture of the present and, last but not least, on Berresheim's oeuvre.
From August 2020, the exhibits – framed works, prints and textile works – will be on display in Wassenberg's medieval tower, the Bergfried, in one of the production halls of the former Glanzstoff AG, at the Villa Glanzstoff in Heinsberg-Oberbruch and in the two schools. The Begas Haus, the Heinsberg Museum of Art and Regional History, will host an accompanying exhibition showing, in addition to image studies, film documentaries and 3D-rendered moving images, the works of the pupils to illustrate the individual production processes that make up the exhibition project. That way, the collaboration with Berresheim renders the pupils visible as independent authors and accentuates their creations alongside the collective piece of art and the artist's works. All exhibition stations are part of a permanent digital art route in and around Heinsberg that can be explored by foot or bicycle and connects nature with central cultural sites and places of social life: With the help of an augmented reality app, the computer-generated artworks can be visited in a number of public places where people typically meet.
In this comprehensive exhibition concept, Berresheim inserts his work of the last two decades in the socio-cultural context in which he grew up and from whose riches he continues to draw. The exhibition therefore plays a key role within his oeuvre, since – beyond the art historical and technological references – his works can also be read as reflected resonance spaces of visual and social culture by a heterogeneous group of beholders. In terms of media, the exhibition route creates a variety of accesses and situations that expand the institutional framework of how art is perceived and strip it of its boundaries. Instead of dissolving art and distilling it into life practice, Berresheim provides the means for a differentiated perception of how the two are linked. In the process, he effortlessly dissipates any apparent barriers between art, technology and society (image: Tim Berresheim: „Störgrösse. Aspettatori AAWNK. Burg“, 2020, .