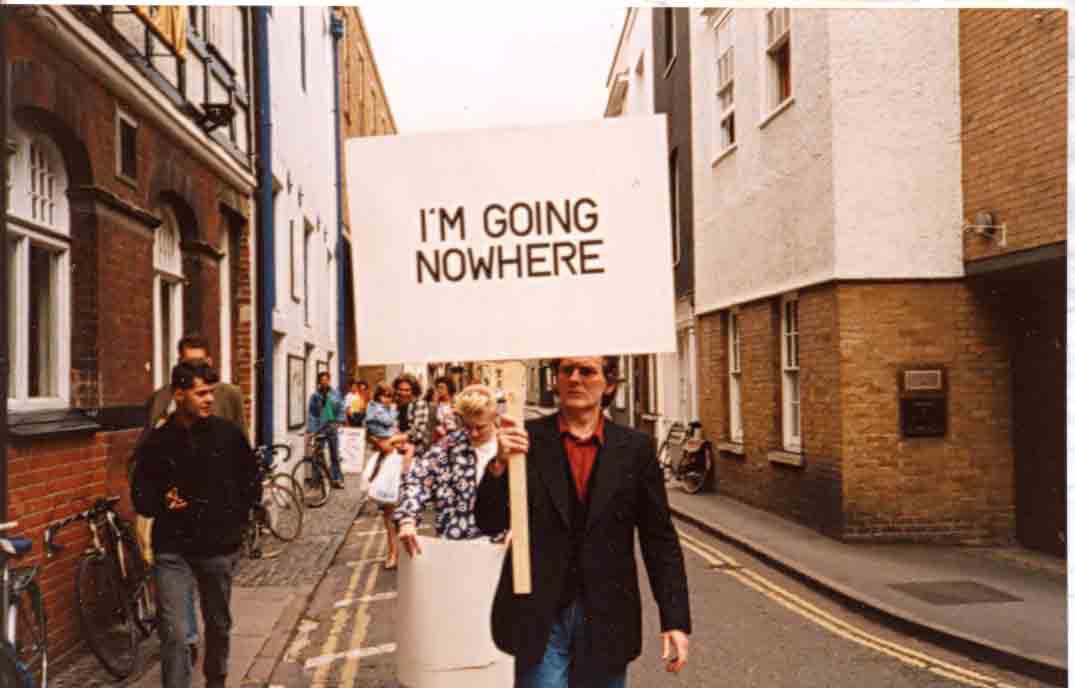 This three day international Symposium was convened by Stephen Willats with the support of David Elliot, the then Director of MOMA, and Chrissie Iles and John Lesley in 1990. As part of his opening address, Stephen Willats explained the aim of the event:
„In convening this Symposium, I propose that it is the artist that can exert pressure for change by the nature of the art practice that is made, even if this is in opposition to what is currently being legitimised by the dominant culture.  But for any such divergence to occur, a measure of self-organisation among artists will have to be generated that can result in new networks, that will mutually reinforce a move towards art as a social process.  New, non-object-based forms of expression must be seen as pertinent and legitimised in the culture-making process. However, the artist needs to beware of the pitfalls that will inevitably be encountered and recognise that the dominant culture will temptingly legitimise those aspects of a new practice that will reinforce the continuation of its own ideologies and will act to inhibit or marginalise anything else. The artist must, therefore, ultimately have the strength not to look to the dominant culture for approval and must take it upon himself to initiate new frameworks in which to operate. Art as social process opens up the possibility of new functions for an artwork by denying any object base, but only when a strong body of work is simultaneously being undertaken by different artists operating outside an object-based territory, who are also in communication with each other, will the lure and power of institutional individualism be neutralised. For the pragmatics of sustaining an individual practice, to the extent that it has an effect beyond an immediate personal context, necessitates a community that can provide, even at an extended level, real support. It is from this that the actual pragmatics and will to make an art creating society can be stimulated.“ – Introductory notes by Stephen Willats

The Symposium opened on Friday 1 June,1990 with a performance by Tomas Ruller, whilst Endre Tot's performance expanded into the streets outside the gallery.  Talks and discussions over the Symposium started with Daniel Dewaele who considered the idea of the avant-garde as a promotional activity for a better world – is socio-political engaged art a possibility or a contradiction?  The first morning included Frank Popper's Arts Without a Social Impact: From participatory kinetic art to interactive technoscience art. He examined four forms of expression: kinetic art in the 1950s and 60s; happenings, actions, events and performances in the 60s and 70s; graffiti and mural art of the 70s and 80s; technoscience art of 80s and 90s. He showed the different kinds of social impact artistic intervention can have.

The impact of technology was further discussed by Ernest Edmonds, Communicating through Video Constructs. By taking the 1970s 'Communication Game' he used the concept to realise video constructs in which participants interact and discuss implications of the development. Similarly, Richard Kriesche showed how telecommunication and powerful electronic images provide a force for revolutions and this artistic, aesthetic impact of images is a true social force of electronic imagery and 'gestaltungwerk'.  The Saturday discussions focused on 'Site – Art & Context'. Dennis Adams talked about the potential of temporary public interventions, the relation of history and memory to site, and the politics of the artist/stranger. Michael Gibbs interpreted the dynamics and discourses of shopping centres – their architectonics, behaviour and resistances and Mark Lewis looked at power and control in public art; how the public body is policed and defined through public monuments. The morning ended with Andreas Seltzer asking questions on the way the gallery can change the looking at art and Simon Cutts and Colin Sackett introduced the idea of the 'allotment' as a concept.
In the afternoon programme there were more discussions and performances, including those by Jaroslaw Kozlowski and Lili Fischer, who entitled hers, Artistic Accessories for the Home.
The Sunday morning session, Art as a Social Process, included talks by Stephen Willats, Philip Peters, Luc Deleu and Stephen Bann.