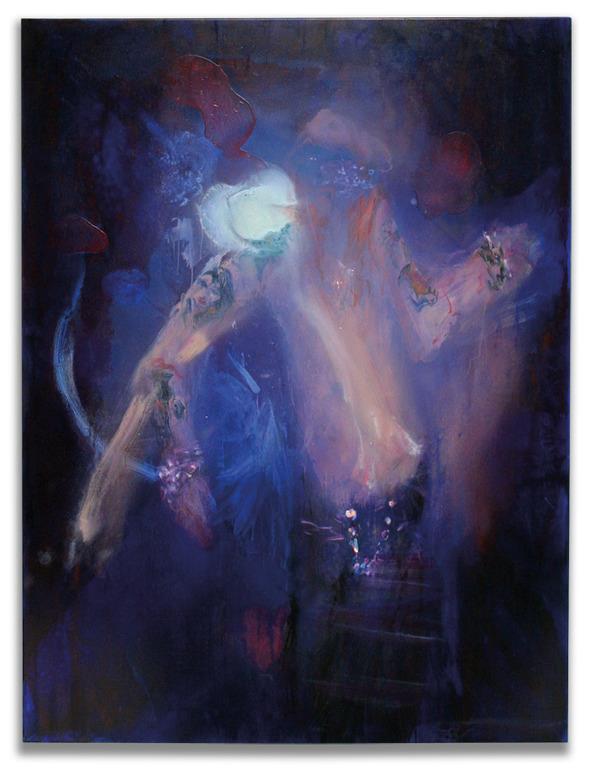 The epic, the icon, the genre, the trope - classical structures to weave meaning and present a world-view. In this way, the work of Berlin based artist Alisa Margolis (*1975) has integrated the iconography of rock'n'roll with classical imagery, the baroque in particular, into a personal vocabulary of expansive dark canvases in which abstraction and figuration interact.
From her early work with American cheerleader formations, to the more explicit reference to the baroque in her use of Dutch 17th century flower painting, Margolis takes up imagery not so much to critique, but to stretch and pull at it, to test, explore and challenge its ability to move us and convey meaning. And this stretching and pulling finds its form and counter-point in the integration of both classical painting techniques with strategies drawn from process-painting and abstract-expressionism.
In this new body of work these themes have come into more focus, with two works taking up the reclusive rock icon Axl Rose, already a kind of living-legend or myth. The flowers that populate so many of Alisa Margolis' works are now juxtaposed with that other great still-life element - skulls, unfolding and emerging in patterns that both evoke specific characters and abstract designs. This funny/morose quality of the skulls is developed further through the two works in which the materiality of paint and gesture combine to evoke classical cartoon ghosts.
In the show, the key elements of myth appear as Margolis' personal cosmology - the hero, the chorus, the re-occuring fear of death, treasure, only without any clear ending, the elements suspended in space, confronting us with their potential.